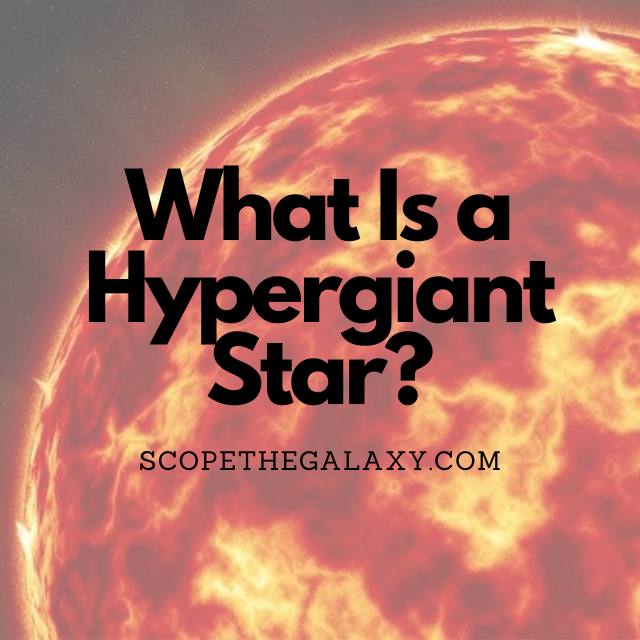 The universe is filled with a plethora of different-sized stars, the biggest of which we term “hypergiants.” These stars dwarf our Sun, which seems tiny when compared to the size and mass of these colossal entities. And these hypergiants possess some truly strange characteristics.

Continue reading to answer all your questions about these “monsters” of the universe.

What Type Of Star Is A Hypergiant Star?

A hypergiant is a rare star type that possesses exceptionally high luminosity, size, and mass. It also has a higher than average loss of mass thanks to the presence of stellar winds.

These “powerhouse stars” have an energy output thousands of times more than our Sun, which they primarily release in the UV rather than the visible portion.

Hypergiants are the true “monsters” of the universe; one blue hypergiant, Eta Carinae, is 180 times the size of our Sun, 150 times the mass, and exudes 4 million times as much energy!

If these stars were sentient, their motto would be “live fast, die young.”

Who Discovered The First Hypergiant Star?

In 1956, two astronomers – Feast and Thackerey – coined the term super-supergiant to refer to stars with an absolute magnitude brighter than MV = −7.

In 1971, the American astronomer Philip Keenan suggested that this term only be used for stars that demonstrated a minimum of one broad emission component. This “Keenan Criterion” is still one of the most commonly used gauges implemented by scientists today.

How Do Hypergiant Stars Form?

When a hypergiant forms, they use all available material surrounding them to create a massive star that shines with outstanding luminance.

A hypergiant forms in the same way a regular star would; as dust and gas collect together in space, the growing mass of these objects starts to create gravity. As the mass continues to build, these molecular clouds begin to collapse under their own gravity. When this happens, the material at the center begins to heat up.

No matter the size of the star, all begin formation in this way, and at some point, they “turn on” and begin to fuse hydrogen at their core.

As the hot core of a star takes shape, it begins to collect other dust and gas from the surrounding area. With an average star, the remaining material creates planets, comets, and asteroids. But, in the case of a hypergiant, the hot core attracts and accumulates all of the star building materials within its reach.

The period during which hydrogen fuses in the star’s core is referred to as the “main sequence” and represents the majority of a star’s life.

While the process in which a hypergiant forms is similar to that of any other star, these vast, burning masses possess several unique qualities that separate them from “normal” stars such as our Sun.

What Happens When A Hypergiant Star Dies?

One of the most significant differences between a regular star and a hypergiant is how they die. A typical star, like our Sun, will end its life as a planetary nebula. Here, the star blows off its outer layers to reveal the white dwarf at its core.

However, when a hypergiant exhausts its hydrogen supply, something much more catastrophic occurs. Instead of shrinking to transform into a white dwarf, these hypergiants grow bigger. This expansion arises from the start of fusing helium into carbon and oxygen at its core.

As the interior heats up, it eventually causes the exterior surface to swell, the purpose of which is to stop the star from collapsing in on itself.

During these phases, the star rapidly loses mass and can shine very brightly.

And this is what defines a hypergiant: a bloated star with a significant mass but also a high rate of mass loss. Thanks to these characteristics, a hypergiant will only live for a few million years, a very short lifespan as far as stars are concerned.

This short life span means they move from baby to hydrogen fusion to exhaustion efficiently, far faster than that of a smaller star such as our Sun.

As the core of a hypergiant fuses heavier and heavier elements, all that remains is iron. At this point, fusion ceases, and the outward pressure of the core ceases to be effective in preventing collapse.

Then, the stars collapses, quite monumentally, as a hypernova, an intense outward burst that contains immense amounts of debris and radiation.

As the star explodes, it leaves behind a black hole, neutron star, or magnetar surrounded by a vast field of stellar debris that spans many light-years across.

How Many Hypergiant Stars Are There?

Hypergiants are incredibly rare stars. The most abundant star type in our galaxy is the red dwarf, including stars such as our Sun. These account for 10% of all the stars in the universe. In contrast, only 0.0001% are supergiants.

With an estimated 200 billion trillion stars in the universe, we could expect around 200 quadrillion of them to be hypergiants.

Astronomers use the term hypergiant to describe the biggest, most massive stars in our universe. Not only do these stars possess an impressive size, but they also lose mass at an astonishing rate. One day, when these monster stars run out of materials to fuse, they will explode in a hypernova, leaving behind an epic landscape of destruction and stellar remnants.

Hypergiants: the Most Massive Stars in the universe (thoughtco.com)

What Are Hypergiant Stars? – Owlcation