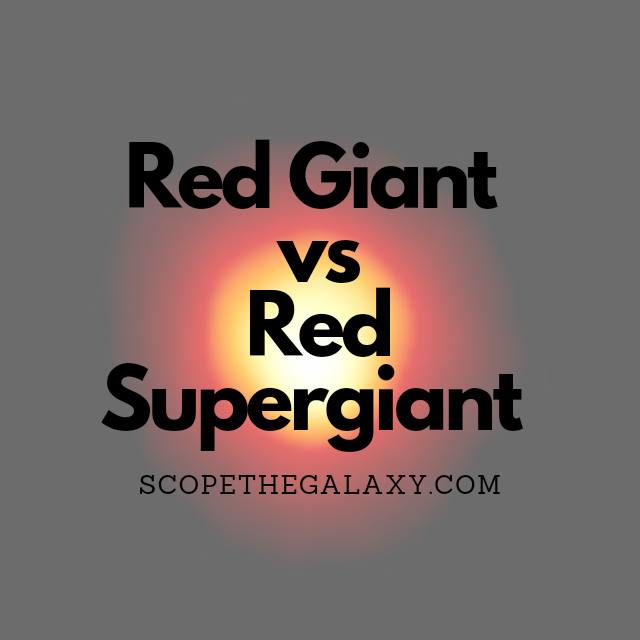 Red giants and Red supergiants are both the final forms before stars become the dead remnant stars, where the smaller red giants become white dwarfs and the larger red supergiants will experience a supernova explosion, becoming either a neutron star or a black hole once the explosion settles down.

Continue reading for a more detailed description on both celestial bodies along with the similarities and differences between the two.

A red giant will grow 100 to 1000 times wider than the size of our sun, giving it a total width of somewhere between 100 million to 1 billion kilometres. And it’s this vast surface area that keeps the temperature relatively cool – 2,200 to 3,200 degrees Celsius.

What Is Red Supergiant?

A red supergiant is simply a red giant but significantly bigger. They’re all formed when a main sequence star is unable to convert hydrogen to helium therefore, the natural process of nuclear fusion begins fusing heavier elements causing the star to exponentially increase in size.

These are by far the biggest stars in our universe, in terms of size but, when it comes to mass, as they are continuously shedding weight they’re not the heaviest. Betelgeuse is one such red supergiant which is situated extremely close to Earth, only a short 700 light years away.

This star is roughly 900 times the size of our Sun which would make it around 1.23 billion kilometres in diameter. When put into perspective this distance is almost the distance that separates Earth from Saturn. Saturn is roughly 1.51 billion kilometres away from us so super redgiants, with betelgeuse in particular, are simply unfathomable when it comes to size.

Due to their gargantuan size and initial life of stars that were still significantly bigger than our Sun (which is theorised to bloat to roughly 256 times its current size in it red giant phase), it would make mean that Betelgeuse was roughly 4.8 million kilometres in diameter when it could actively convert hydrogen.

Betelgeuse as a supergiant is also a very likely candidate to experience a supernova explosion. Supernovae require stars that are at least 1.44 solar masses in size, whereas this star is 16.5 – 19 solar masses.

Most supergiant will be between 10 – 70 solar masses, making Betelgeuse on the lighter end of the spectrum. It’s also far from the biggest too, with a supergiant called UY Scuti 1700 times the size of our Sun and roughly twice as big as Betelgeuse.

Therefore, it’s almost guaranteed that Betelgeuse, among other red supergiants, will experience a supernova explosion and become either a neutron star or black hole, based on if the materials left after the explosion amount to 3+ solar masses or not.

Once the phase is complete both entities will leave behind dead stellar remnants like white dwarfs, neutron stars or a black holes.

In many ways red giants and red supergiants are born from the same circumstances however, the differences they showcase are quite prevalent.

These differences would include the following:

The lifespan of each celestial body, the remnants of dead the stars that remain, the luminosity and of course mass and size are significantly different between the two. Nevertheless, both are precursors to the death of a stars, caused by nuclear fusion being unable to convert hydrogen to helium.