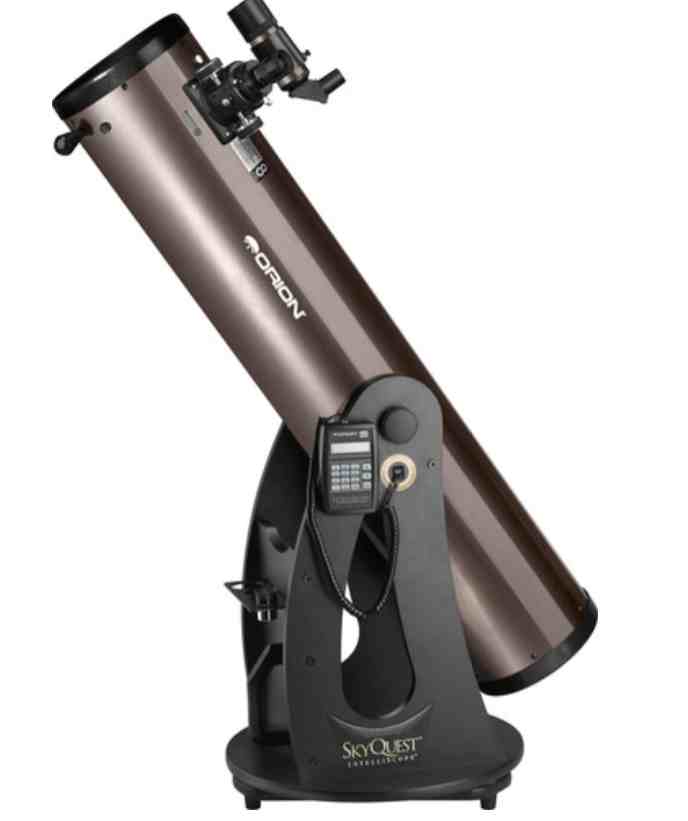 If you’ve found yourself here, there’s a good chance that this telescope is on you’ve been hearing really good things about, receiving a bunch of positive feedback on when it comes to its quality however, you also don’t want to jump head first without learning a few things about it right?

If that’s the case you’ve come to the right because here we’ll be discussing the pros, cons and other features of the device to help you decide if the Orion SkyQuest XT8i is a worthy intermediate/advanced level telescope or one that you should simply skip.

The SkyQuest XT line up of telescopes offered by Orion all provide the same type of optics within their devices with the main differences being the computerised element of the devices.

The IntelliScope simply provides the use of a more advanced manual computerised mount (which I’ll get into later in the review) which of course explains the XT8i’s price hike over the XT8 for example.

Just so you know, telescopes tend to come in one of 3 different optical variants, these being reflector, refractor and compound optics.

The XT8i in this case comes with Newtonian reflector optics inside the tube meaning the primary mirror inside is a parabolic one. This in turn will allow for the images being viewed to align at a singular point resulting in crisper viewing experience. .

Of course the crisper more detailed image will only be possible when aligned properly. Thankfully even out of the box the XT8i appears to come collimated so this shouldn’t be too much of an issue when you’re immediately starting out.

Anyways, regarding the pros of the reflector optics inside the the XT8i, they include the following :

Nevertheless, with the specs of this device you will be able to see the following celestial objects, some even in heavily light polluted areas, due to the light gathering capabilities of this telescope :

Dob telescopes, especially ones at this power level aren’t designed to be portable but, I’m sure you already know this. As a result its height comes in at around 120cm as the tube itself is 113cm, whilst it’s fully assembled weight will be 18.9kg.

This means although it is heavy, with the help of another individual or if you’re strong enough yourself it will be fairly manageable to move it around or place in a car to observes lesser light polluted areas.

Moreover, it is actually possible to sperate the tube and mount making it easier to carry. 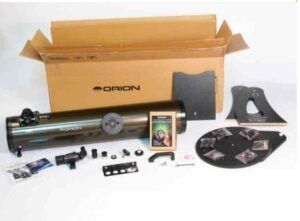 The XT8i comes with 2 1.25″ Sirius Plossl eyepieces at 25mm and 10mm, a 2″ Crayford focuser, a 9×50 RACI finderscope, an eyepiece rack for the different sized eyepieces and a bunch of miscellaneous documents.

The eyepieces are solid and will allow you to see quite a few of the planets with the 10mm magnifying to 120x whilst the 25mm will be a solid starter eyepiece allowing for wider field views.

Of course investing in a 5mm eyepiece or a Barlow lens will allow you to see further away objects but, as a a couple of inbox eyepieces, they’re solid (however, if you want to upgrade them, I’d suggest checking out our list on some great eyepieces best) .

The Crayford focuser will allow you use the wider  2″ eyepieces and the more common 1.25″ through the use of the included adapter and it works smoothly.

The finderscope is very good too as it’ll allow users to quite smoothly hop from one star to the next even in light polluted areas, which can’t always be said for the lower quality red dot finderscopes found with most other telescopes.

The mount used here is essentially the same as the XT8’s Dobsonian mount but it includes computers inside which will allow users to find objects more easily however, the mount here is actually manual otherwise known as a PushTo mount.

What this means is that the computers will guide you whilst you have manually position the XT8i unlike how a GoTo Mount which would automatically point and track the celestial object in question.

The ability of the computers are quite solid and it currently has a database of over 14k celestial objects to look into. The stability of the mount is great too so you won’t be dealing with shaky views whilst manually positioning the device, which is not something that can always be said for tripod based telescopes.

The only major gripe with this mount is its use of particle board as they are known to rot over time.

Nevertheless, as a whole the Dobsonian mount used by the XT8i is still very good and should honestly satisfy the majority of users in even some of the more windy outings.

What Are Users Of The Orion SkyQuest XT8i IntelliScope Saying

Users for the most part have found the XT8i to be a very good telescope that performs well in most situations (even heavily light polluted ones) with the computerised functionality and the collimation process being quite easy to use and do. 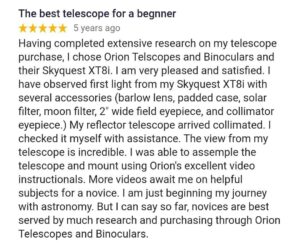 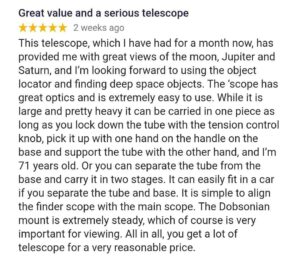 Of course the lack of quality materials used on the mount and the somewhat long process of fixing up the device after delivery are the only majors cons (along with the price too maybe). Nevertheless, most do consider it to be near enough the most complete telescope around in its bracket. 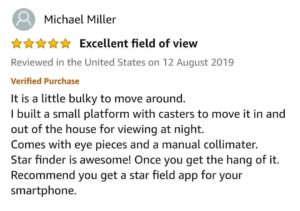 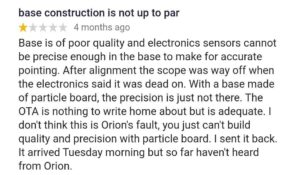 In all honestly there isn’t very many if any devices out there much better than the XT8i in terms of capabilities taking into account the performance to functionality aspect of a telescope but, if you are looking into some alternative computerised telescopes, this list may be worth looking into.

If on the other hand you don’t mind sacrificing the PushTo mount in exchange for more performance, the Zhumell Z10 is a solid pick. If instead you want just the base characteristics of the XT8i but, for less money the skyquest XT8 is also an awesome telescope worth looking into.

The SkyQuest XT8i IntelliScope is a very good device and will provide intermediate and even advanced astronomers with a great experience when observing outerspace, even in some of the more light polluted areas.

Other than the use of particle board on the mount and the somewhat expensive price tag for the specs, there honestly isn’t anything detrimental to the XT8i at all.

So, if you’re in the market for a very competent telescope and have a enough room to store it, the XT8i is among the best choices to go for.