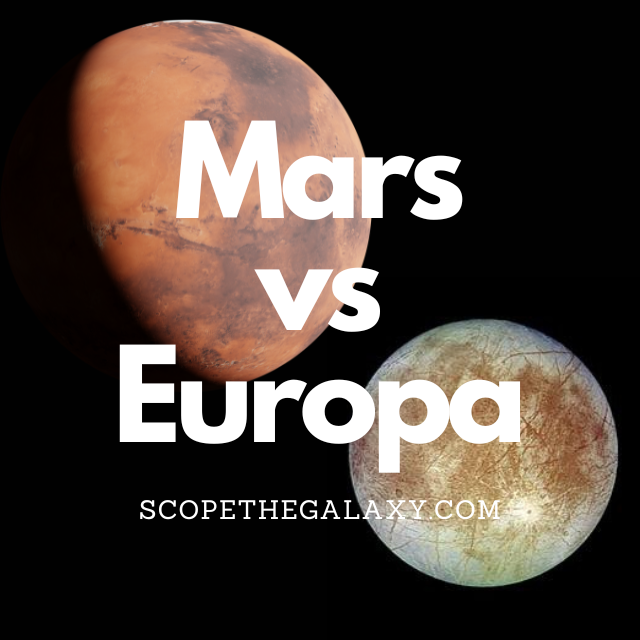 The main differences between Mars and Europa would be that Mars is a normal terrestrial planet that orbits the Sun whilst Europa is the smallest of the Galilean moons that orbits Jupiter, Mars has 2 moons whilst Europa has 0 and Europa is colder on average with temperatures around -160°C whereas Mars averages -60°C on its surface.

There are numerous other differences and even a fair few similar features between Mars and Europa so, continue reading if you’re after a more thorough breakdown of each celestial body, their similarities as well as the differences between the two.

It has a diameter of 3,121.6km, which makes it larger than pluto but smaller than the Earth’s moon, and the maximum temperature is a chilly -160 degrees Celsius. In regards to mass, it measures in around 4.8 × 10^22 kg.

How Are Mars And Europa Similar?

The similarities between Mars and Europa include the following:

Differences Between Mars And Europa

In regards to the differences between these two entities, they would include the below:

Even though Mars and Europa share various features such as the lack of plate tectonics, no magnetosphere and their general terrestrial composition, the two differ quite significantly still.

Whether it be in regards to their temperature, size, gravitational strength, their surfaces and beyond. Ultimately the two do function distinctly from one another, after all Mars is a planet with 2 moons orbiting it whilst Europa is simply one of Jupiter’s 79 moons.