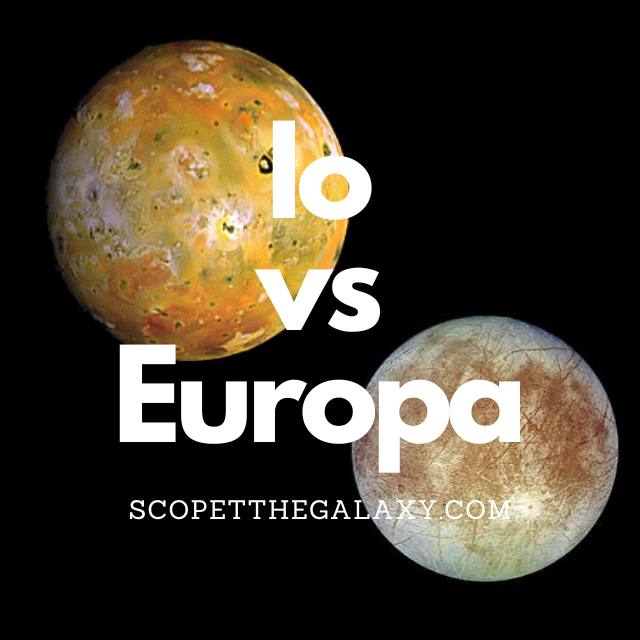 The main differences between Io and Europa are that Io is the most volcanically active entity in our solar system, is the second brightest moon and is the 4th largest moon with a diameter of 3,643km whilst Europa is the brightest moon in our solar system, has water ice on its surface and is the 6th biggest moon with a diameter of 3121.6km.

There are various other differences between the two so, continue reading for a more detailed look at each of these natural satellites along with their similarities and differences below.

The Moon Io – also known as Jupiter I – is the third largest of the Galilean moons, which has the closest orbit to Jupiter. It is the fourth-largest moon in our solar system by size – with a diameter of 3,643km – but has the highest density of all moons in our solar system.

Perhaps the most interesting feature of this lunar body is the 400 active volcanoes on its surface, which make it the most volcanically active object in the solar system; some of these volcanoes can exude plumes of sulfur to a height of several hundred miles.

Similarities Between Io And Europa

Differences Between Io And Europa

Whether it be in regards to mass, size, volcanic activity, the presence of water ice and more, the two are still easy enough to separate as their surface activity is completely unique from one another.

2 thoughts on “Io vs Europa (How Are They Different?)”