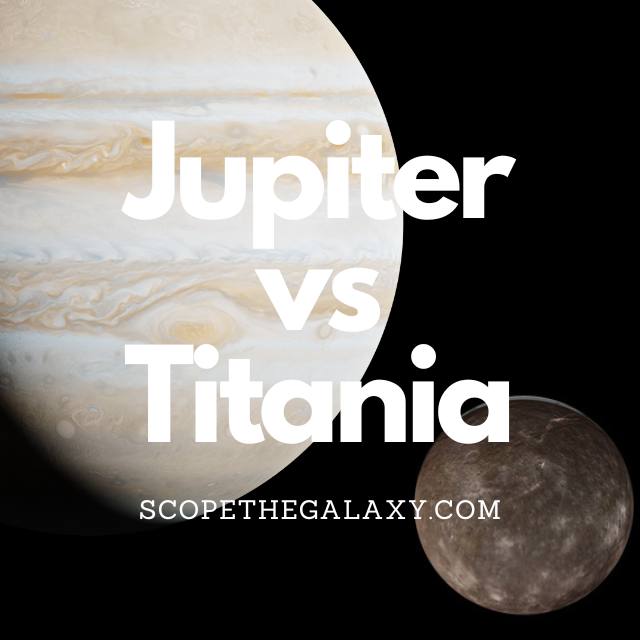 The main differences between Jupiter and Titania is that Jupiter is a gas giant planet with 79 moons whilst Titania is a natural satellite the orbits Uranus, Jupiter is around 90 times the size of Titania in diameter and has the strongest magnetic field in our solar system whereas Titania doesn’t have a magnetosphere.

There are various other differences between the two so, continue reading for a more detailed look at each body along with their similarities and differences below.

Titania tilts slightly towards the equator of Uranus and is tidally locked to its planet. This means a Titania day is 8 days and 17 hours which would be the same for its orbital cycle.Titania has an average temperature of -203 degrees Celsius.

Similarities Between Jupiter And Titania

There are a few similarities that Jupiter and Titania share, which in this case includes the following:

Differences Between Jupiter And Titania

In regards to the differences between the two, they include the below.

Jupiter and Titania share very few similarities between themselves, such as the fact both are part of the same solar system and neither have tectonic activity on their surfaces but, they are definetly more different than they are similar.

Whether it be in regards to mass, size, physical composition, orbital period, density, magnetic field and more, which is why Jupiter is very distinct in its functions, especially when compared to the far smaller natural satellite Titania.