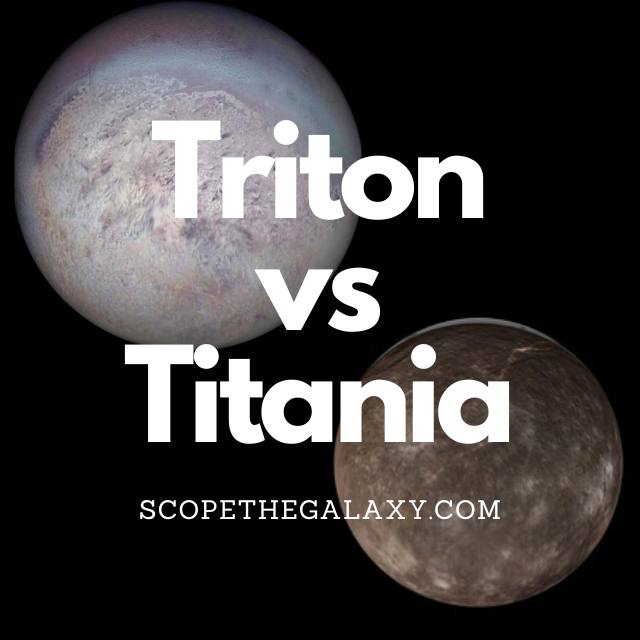 Triton is Neptune’s largest moon, while Titania is the largest moon of Uranus. These frozen worlds have a similar composition of the rocky core and icy mantle, and their tilts and tidal locks provide them with exceptionally long seasons of up to 42 years. Still, there are significant differences, such as Triton’s retrograde orbit and volcanic activity. And Titania’s mantle that could produce ammonia to act as antifreeze and allow for liquid water.

Continue reading to discover more about these two fascinating worlds along with a more detailed breakdown of their similarities and differences below.

Triton is the largest moon of Neptune, whose most unusual feature is its retrograde orbit. Triton is the only major moon in the Milky Way which orbits in the opposite direction of its planet’s rotation.

Titania is the biggest of Uranus’s moons, with a circumference of 4,956km and a diameter of 1576.8km. The high density of this moon suggests that it most likely formed from a collection of dust and debris leftover from the formation of Uranus or from the debris created in the collision that reportedly tilted Uranus onto its side.

Titania tilts slightly towards the equator of Uranus and is tidally locked to its planet. The planet Uranus is also tilted, with the moons orbiting on the equatorial plane, giving it extreme seasons. On Titania, the north and south poles experience 42 years of complete sunshine followed by 42 years of total darkness.

How Are Triton And Titania Similar?

Differences Between Triton And Titania.

If you could travel to the distant landscapes of Triton and Titania, you would notice some striking similarities between these two icy worlds. Not only would they possess similar compositions, but the structure of days, seasons, and years would be far more similar to one another than they would to Earth.

Still, each entity has unique features that make them fascinating for scientists to study. Triton being one of the only objects in the solar system to be volcanically active and Titania potentially producing its own antifreeze are just some qualities that make these moons unique.