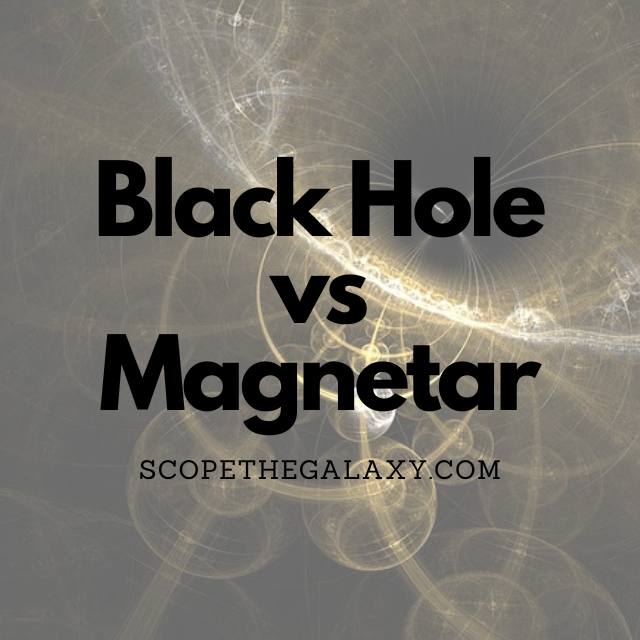 Black holes form when matter is condensed so densely only a dark disc that allows no light to escape remains whereas magnetars form when a large star that dies is unable to become a black hole. Magnetars are essentially the strongest form of a neutron star producing magnetic fields stronger than most in the cosmos, all whilst being a measly 15 – 25km is size.

This is simply the main difference between the two. If you want to learn more about black holes and magnetars, how they’re similar and how they are differences, continue reading.

A black hole is created when a large star about 3 – 4 solar masses collapses below its Schwarzschild radius causing a supernova explosion. The density of the star creates a massive gravitational pocket and pulls everything within its vicinity into it.

What Is A Magnetar?

Magnetars are simply put, neutron stars that are significantly more powerful than the more abundant neutron star variant, pulsars, as they emit gamma and x-ray radiations that are a step above the normal radio waves often projected out.

Just like pulsars magnetars are extremely small but dense. On the upper end of their size, they are roughly 24km with a mass that 1.5 times the Suns.

In layman terms, this means these stellar remnants are very dense considering it’s barely the size of small town yet weights 50% more than an object that’s more than a million kilometers in diameter.

Although a magnetars magnetic fields are more erratic than other neutron star variants, we’ve only managed to discover 31 different magnetars.

Of course based on the vastness of space, the true number is likely many thousands to millions times more but, it is an interesting fact nonetheless.

In regards to how strong the magnetic field of these dead stars are, imagine how your typical neutron star/pulsar is able to dilate both space and time but magnify that by a 1000.

Based on these numbers you could say that magnetars have arguably the most powerful magnetic fields (that we’re aware) in our universe.

It’s believed that the magnetar like state only sustains for around 10,000 years after which their magnetic field become weaker and the x-ray and gamma ray emission cease to be.

Although not confirmed the discovery of the 31st magnetar called J1818.0-1607 appears to act as both a magnetar and pulsar implying magnetars might eventually become pulsars.

Black holes may give it a run for its money but, magnetars are still amongst the top dogs, at least when it comes to the strength of magnetic fields in our universe.

To put this into perspective in 2004, rays from a magnetar roughly 50,000 light years was able penetrate deeply into Earth’s ionosphere, which is the electrically conductive layer encircling Earth.

How Are Black Holes And Magnetars Similar?

Magnetars and black holes have their fair share of similarities, with the first being that both form when a larger star explodes in a supernova explosion.

Both can affect space and dilate time around them and are insanely dense. Both do emit gamma and x-ray particles although supermassive black holes are the more likely type of black hole to do this.

Both also are amongst the most dense entities in our universe.

Differences Between Black Holes And Magnetars

As for the differences between black holes and magnetars, it would include the following:

Both black holes and magnetars are among the most erratic and powerful entities in the Milky Way and known universe so, it does make sense that both require an explosive and extraordinary procedure to form as they do.

Both have an immense affect on their surroundings causing space and time to distort and dilate whilst operating with an insane amount of mass in a small dense body. This is what makes them so fascinating yet relatively rare within our Milky Way and beyond.