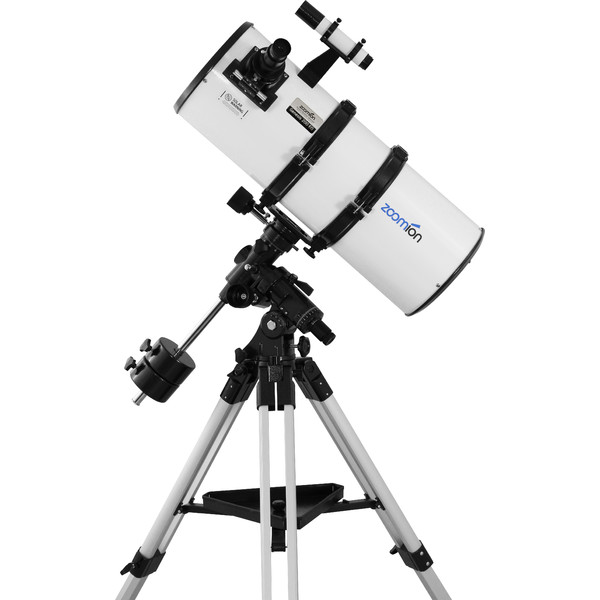 In this review I’ll cover the pros, cons and the Genesis’ features to ultimately help you decide on whether the system is worth investing in or a beginner level device that you should skip out on.

==>Click Here To Check The Zoomion Genesis Pricing On Amazon!

How Do The Zoomion Genesis’ Optics Work?

If you don’t already know, there are 3 different variations of optics within telescopes namely reflector, refractor and compound based optics, all of which have their own sub variations too.

The optics found within the Zoomian Genesis are honestly unclear especially from it’s somewhat shady marketing material. It claims to be a reflector based system yet on the tube it refers to itself as a Newton refractor, which is a condradictory name as Newton based devices tend to have 2 mirrors whilst refractors only tend to have a single glass lens.

Maybe the design used here is of the birds-jones optical variation which is a compound based down optical variation (essentially a design with both a mirror and lens in it) however, that’s honestly regarded pretty poorly amongst consumers.

At the very least based off the information of the device online, it’s very unlikely to be a parabolic based system which means that it will more than likely suffer from spherical aberration.

Furthermore, going off the images of the device online, the tube appears to be enclosed meaning there’s a far higher chance of it being a refractor or a birds-jones device so I’ll list the pros and cons of these optical variations below instead.

The pros of the refractor optical variation is as such :

If we take into consideration that it may also be a birds-jones device, the collimation of the mirror and lens will be hard to adjust, which is notoriously one of that optics biggest issues.

What Do The Zoomion Genesis’ Specifications Mean?

For the $350+ price tag, the specs seem to be a little high in my opinion with an aperture at 200mm (7.9″), a focal length at 800mm resulting in a very slow and wide focal ratio of f/4. This means that the device should, at least according to its copy, be able to achieve a theoretical max magnification of 406x.

Of course I’d imagine it’s real world power would be much lower especially when you take into account how affordable the device comes in at.

However, if that power is real then you’d be able to view more or less anything you’d want to at the max power of the device but, to break it down the Genesis would technically allow you to view the following celestial objects :

Of course, considering the bad rep the device is getting online I don’t think it’d be able to perform to this level nevertheless, if the aperture is as it’s said to be, theoretically being able to view the aforementioned objects in space should be possible.

Regarding the weight and dimensions of the device, its dimensions come in at 82.6 x 52.4 x 42.2 centimetres whilst it’s weight is around the 20kg mark. In short it definitely not a portable device so take this fact into consideration before taking the plunge and buying it.

The Genesis comes with 3 Plossl eyepieces at focal lengths of 25mm, 12mm an 6.5mm, an aluminium tripod, an EQ-4 Equatorial mount, 6 x 30 finderscope, a 1.25″ focuser and a bunch of documents.

The eyepieces seem to be the only decent accessories provided in the box even though they will eventually require an upgrade down the line. As for the other inbox accessories, they’re pretty lackluster particularly the 6 x 30 finderscope which is too small considering the aperture.

The tripod from what I’ve researched also seems to be flimsy whilst the mount is too small for the tube meaning if ever you try to view through the eyepiece, the sights may no be the most stable.

Furthermore, if you’re looking for a competent astrophotography device that can shoot more than just the moon, the Genesis is most certainly a system that will not do the job.

What Are Users Of The Zoomion Genesis Saying?

Users definitely did find the device to be competent enough whilst others found it to be too flimsy and certainly not worth the $350+ investment. 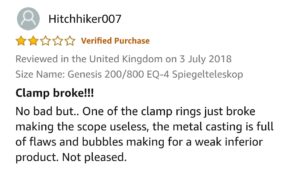 If you’re looking for other competent refractor based telescopes, you can check this list out for some alternatives. If on the other hand you’re just looking for a couple of the better if not the 8inch telescope around, the SkyWatcher Dobsonian 8 inch or the Skyquest XT8 are great systems to look into.

Overall, judging based of the information found about the device online along with all the peculiar things it seems to say, such as it being a Newton refractor, I personally don’t think the Genesis is worth buying and is a system you more than likely should skip.

Of course if you still want to test it out, it does still work well enough, despite the heavy coma it seems to display according to users.

==>Click Here To Check The Zoomion Genesis Pricing On Amazon!