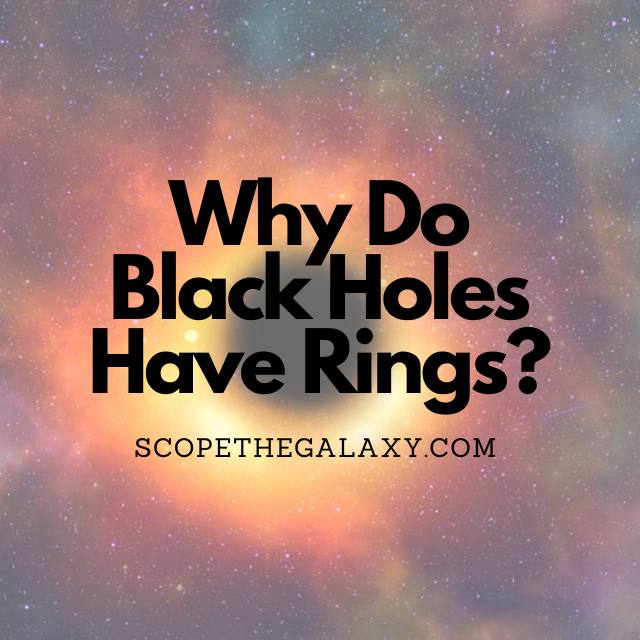 On the edge of a black hole lies an area where matter can still possess just enough energy to escape the enormous gravitational pull of these monsters. Thanks to the excessive energy output of these particles, they emit energy in the form of light and heat, allowing us to observe rings – or accretion discs – around the black hole.

Continue reading to discover why black holes have rings and how they form; plus, learn how many rings a black hole can sustain and whether they will eventually consume this matter.

How Do The Rings Around Black Holes Form?

Our Sun holds planets in its orbit, while Saturn has vast rings of dust and gases; in the same way, the gravity of a black hole draws in matter towards it, while the circular motion causes this matter to spin.

As the matter is drawn closer to the black hole, it reaches an equilibrium whereby the speed of its spin and acceleration matches the gravitational pull of the black hole. This balance of forces means that the matter begins to orbit the black hole. And, over time, as more matter accumulates, it forms a ring.

The rings around a black hole are called accretion discs, which contain matter attracted to the black hole’s force. The matter often emits radiation on every spectrum, including those visible to us. This allows us to see the rings of a black hole, which the friction between the disc particles causes them to appear extremely bright.

When we observe a black hole, we can see a dark center (or the black hole’s “shadow”) surrounded by a ring of glowing material. The published images of black holes do not accurately represent the hues of the gases; instead, they represent the brightness of emissions – red is less intense, while yellow is the most intense.

In real terms, this glowing ring would most likely appear white, with possible tinges of red or blue.

Our telescopes are nowhere near advanced enough to detect black hole emissions, the only way we can see these space oddities is by viewing the outer edges – or rings – where photons still possess the ability to escape the force of the hole.

How Many Light Rings Can Black Holes Have?

Black holes possess an incredibly intense gravitational force, so intense that even photons traveling at the speed of light cannot escape their grasp. In addition, this force is strong enough to bend the path of any light particles that travel just beyond the event horizon.

When a passing photon gets too close to a black hole, it cannot escape; still, it possesses sufficient acceleration to escape the pull of the black hole and thus falls into orbit.

Thanks to ongoing research, we know that black holes possess a nested set of rings rather than just one. While these rings have a similar diameter, each succession appears slightly sharper as its light particles have orbited the hole more times.

The size of these rings can provide scientists with essential information about the black hole, such as its size, mass, and rotation,

During research into the universal interferometric signatures of a black hole’s photon ring, scientists observed that each ring of a black hole is similar to an individual frame of a movie, where each concentric circle contains an “exponentially demagnified image of the entire Universe.”

These rings capture the black hole’s vision of the Universe during an earlier time, with each slotting together to form a series of snapshots in time.

How Hot Are The Rings Around Black Holes?

Nothing can survive inside a black hole, hence why the center of these monsters is freezing. But on the outer edges, where photons and other particles still hold enough energy to escape the gravitational pull, temperatures are much higher.

The temperature at the center of a black hole sits about one-millionth of a degree above absolute zero. Meanwhile, in the rings, where particles travel at the speed of light, temperature rise to millions of degrees.

This incredible amount of light, heat, and energy allows scientists to observe black holes rather than the freezing environments of the black hole itself. The gas and dust that falls into a black hole’s orbit heat up to billions of degrees. This matter then ionizes and experiences turbulence through the magnetic fields; this gives the ring an almost “glittering” appearance to observers.

Do Black Holes Consume The Rings Around Them?

A round orbit – be it that of a planet orbiting a Sun or matter orbiting a black hole is very stable and can maintain its perfect distance from the balance of forces. In contrast, an oval or elliptical orbit is unstable, and there may come a time when the force of gravity overcomes the rate of acceleration, causing the black hole to consume the surrounding matter.

The reason black holes almost always have accretion discs rather than spheres is that a sphere will ultimately collapse into a disc because the matter within its orbit collides with one another.

The rings of a black hole contain matter that has enough acceleration and outward energy to balance the pull of gravity. This matter doesn’t have enough energy to escape the gravity altogether, which is why it settles into an orbit of the black hole.

When we observe black holes, we do not possess sufficient equipment to see into the dark world at the center of a black hole. Instead, we use these hot, bright rings to give us information on the size, mass, and rotation of the black hole within.