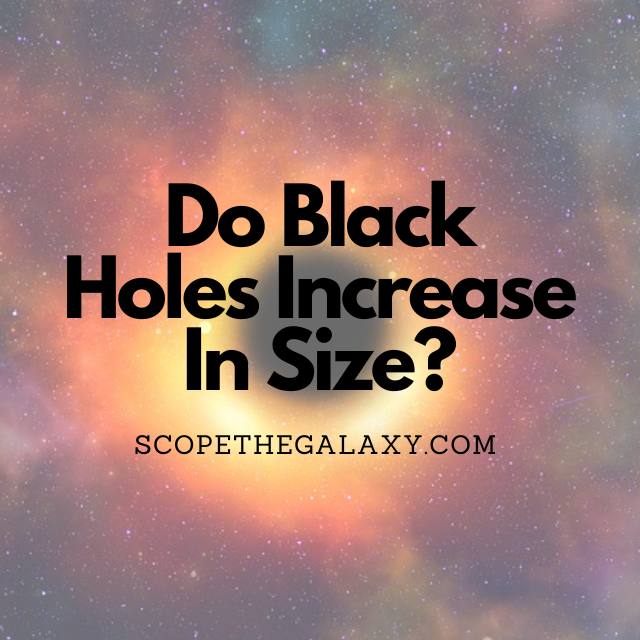 Black holes are mysterious objects that pose a paradoxical problem: they remain at a consistent size, but their interior volume increases forever.

Discover how and why black holes increase in size and the reasons why an “evaporation” could be possible.

How Do Black Holes Increase In Size?

Black holes increase in size by consuming material that is nearby. Thanks to the intense gravity of these stellar objects, anything that passes the event horizon will have no way to escape.

Don’t think of a black hole as a cosmic vacuum cleaner, though; these dark giants only consume material in their close vicinity. A better way to think of them would be as a Venus flytrap; they absorb material that enters their space.

For example, if a black hole replaced our Sun, life on Earth would die because of the lack of light and nourishment; still, the planets would stay in their orbit, undeterred by the gravity of the black hole.

The main components of a black hole’s “diet” are gas and dust, which fill up the majority of the empty space in our universe. In addition, black holes can sometimes swallow stellar matter and even whole stars.

A black hole can also “grow” and gain mass by colliding and combining with other black holes. This growth process often alerts scientists and astronomers to the presence of these stellar bodies; as gas falls toward the black hole, it heats to extreme temperatures and emits x-rays and radio waves.

Is There A Limit To How Much A Black Hole Can Increase In Size?

One theory as to why black holes continue to increase in volume is based on the quantum nature of the gravity inside the black hole.

A black hole is a spherical region of space where gravity is so extreme that not even photons – or light particles – can escape. Scientists discovered these stellar oddities more than a century ago to solve Einstein’s theory of relativity.

Einstein’s theory states that the force of gravity curves in space-time (the four-dimensional fabric which comprises our universe). In a black hole, the gravity is so strong that this fabric bends towards its breaking point.

This inward gravitational collapse continues infinitely; even though the outside appears to remain at a constant size, the interior expands constantly.

Even in an area where there is no obvious matter for a black hole to swallow, they still increase in size by consuming sufficient amounts of ambient radiation.

Do Black Holes Decrease In Size?

This occurs because the black hole’s vacuum – or empty space – is not truly empty. Instead, it is a mass of particles that continually pop into and out of existence. If a pair of these particles exist near the event horizon, one may be pulled into the black hole while the other escapes its grasp.

Hawking demonstrated the potential for black holes to lose mass and hypothesized that a black hole would shrink (albeit incredibly slowly) through Hawking radiation before exploding in a gamma ray flash.

However, Professor Hawking also realized that somewhat paradoxically, the surface area of a black hole could never decrease.

In recent years, a team from MIT led by astrophysicist Maximiliano Isi conducted research to calculate the surface area of black holes in two time segments. Observing the merge of two small black holes into one, they divided the observational wave data into two segments: before and after.

Their calculations showed a larger surface area in the combined black hole than the total area of the two individual entities. This evidence suggests that black holes do not decrease in size, supporting Hawking’s theorem.

How Fast Do Black Holes Increase In Size?

Black holes can grow at super-fast speeds from birth to death. A black hole possessing a mass ten times that of our own Sun can form in literal seconds following the collapse of a massive star. This type of black hole is relatively small and can also develop in other ways.

Two neutron stars – dense energy collections of dead stars – can merge, a neutron star can combine with a black hole, or two black holes can merge. Either way, they quickly form a black hole and emit gravitational waves or ripples in space-time.

In contrast, supermassive black holes – those found at the centers of galaxies – can possess billions of times the mass of the Sun. Still, less is known of their formation, and scientists have not yet calculated how long it would take one to form.

We can surmise that these supermassive black holes would take less than a billion years to reach their enormous size. They experience rapid growth rates by consuming surrounding gas and space matter.

Black holes increase in size thanks to the abundance of dust and matter surrounding them. Even “empty” space is not a true void and can still provide nourishment to these monsters.

While Hawking’s theory states that a black hole could shrink, it would take a significant amount of time for the escaping radiation to have any significant effect.

How Black Holes Keep Their Size While Growing Constantly – The Atlantic

Does a black hole keep increasing in size? – Quora