If you’re in the market for a computerised telescope, there’s a very good chance that the Meade ETX125 will have been suggested to you.

And of course on the surface the device does seem to look good, being lightweight, moderately powerful and most prominently fitted with a GoTo mount, making it a fair bit easier to locate any celestial objects that are within the systems database.

Ultimately, in this Meade ETX125 review I’ll go over the pros, cons, features etc. to hopefully help you make the decision on whether the system is worth a purchase. 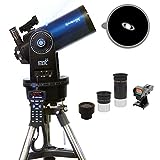 Before moving on to the core elements of the review, I want to give you some perspective on how the meade etx line first became what it is now.

The ETX line first came into the scene in 1996 in the form of the meade ETX90 RA (aka astro version), which was created directly to compete against the Questar and replace Meade’s old 4” Schmidt-Cassegrain which had very poor sales numbers at the time.

This new telescope by meade became a huge success for the company, which in turn led to them spawning a whole plethora of devices within the ETX line.

After this came the ETX AT which finally decided to use a full GoTo computerised mount with a controller. The ETX125 AT replaced the top end EC model whilst the ETX80 AT replaced the smaller models from the EC line. Another EC product in the ETX105 was created within the 2000’s too but was discontinued in 2009.

The ETX 125 AT went through many variations over the years and was also eventually discontinued in 2011 along with ETX80 AT, both of which were replaced with the ETX90.

It’s only in 2016 when the new observer line came into fruition where the ETX 90 was upgraded and became the ETX80 observer with the ETX125 Observer coming out in 2017, which is now also the top end ETX line telescope offered by meade and of course the telescope this review is based on.

How Do The Meade ETX125 Observer’s Optics Work?

If you’re unfamiliar with the different types of telescopes, you should know that there are 3 main variants of optics inside the tubes. These include a reflector design, a refractor design and a compound design.

Of course there a different variations of a reflector, refractor or compound system but, in general terms these are the base names for each of the different optics.

All of these different variations have their positives and negatives and if you want a more detailed look at the pros and cons of each, you can check this post I’ve written on the topic but, the bottom line is that Meade ETX125 is a compound based Maksutov-Cassegrain which is simply put, a hybrid of a refractor and reflector.

This design also fixes a large majority of the problems the aforementioned designs have and mostly presents the positive  features of a reflector and refractor optics .

Firstly, as the tube is closed, you won’t need to always maintain the optics, chromatic aberration is pretty much non existent and you won’t need to worry about colimating the device all the time either but, the use of a a singular mirror lens for the maksutov-cassegrain optics does mean it’ll be necessary every now and then.

Nevertheless, the Maksutov-cassegrain found in Meade is really good if you mostly plan on observing as opposed to taking images.

What Do The Meade ETX125 Observer’s Specifications Mean

This aperture means that the device will be able to magnify upwards of 250x and the higher focal ratio means that it’ll also be a great device for planetary observation as the larger focal ratio allows for the tube to capture the light from the bright planets at a slower rate allowing for a more detailed view of them.

The device will also be great for checking out nebulae, star clusters, galaxies and other celestial objects too as the GoTo computerised mount should make it a lot easier to lock onto celestial objects over trying to find your own way using other pieces of software.

The truth is you can get devices that are a lot more powerful than the Meade ETX125 for it’s price but, I can understand that one of the main reasons you’d even consider looking into a somewhat underpowered device like the meade is likely because of its mount so, that’s what I’ll be covering next.

The device also isn’t too big heavy either as it’s dimensions are 96.5 x 83.8 x 160 cm with its weight being a moderate 11.7kg meaning if you’re planning to travel with it or move it a up a hill or something along these lines, it shouldn’t prove to be too much of a problem.

==>Click Here To Check The Meade ETX125’s Pricing On Amazon!

The mount itself is pretty decent as it uses good materials, such as metal gears to slow down wear and tear on the device. The alignment process of the mount may prove to be a bit of a bother because the tilt plate that it uses makes it hard to accurately align the latitude as there aren’t any markings to guide you.

There’s also no way to adjust the azimuth to get a precise alignment meaning you’d need to go through the trouble of literally picking up and moving the mount if you want to adjust its positioning, which obviously isn’t going to result in the most accurate of alignments.

On the other hand, the GoTo aspect of the mount is very solid and the audio description of each celestial object also appears to be pretty accurate, although you probably should turn it off to preserve battery, especially if you’re going into the the wilderness to do some viewing.

The battery life won’t be too great either as it only requires 8AA batteries to power but, if you’re planning on purchasing the meade ETX125, I definitely would suggest looking into a DC power supply.

One annoying thing about the device is that if the power is turned off, you’d need to go through the trouble of putting in the date and realigning the scope but, that’s a problem that most GoTo systems seem to have anyways so it’s more so a minor problem anyways.

What Are Users Of The Meade ETX125 Saying

The outlook on the meade ETX125 seems to be quite positive. The device is often praised as being easy to use and the quality of the viewing experience always tends to be solid. And of course the portability of the meade is great too. 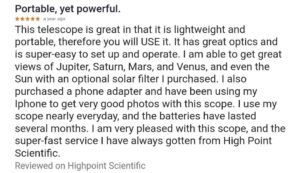 However, others have found that the the lack of a power supply for one and the lack of information on the right supply to purchase for the device can prove to be very problematic in the long run, considering it does cost in the region of $600. It’s also not as convenient for the astrophotography side of things, then again the Maksutov-cassegrain design isn’t the greatest in this aspect anyways as I’ve stated above. 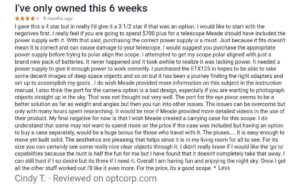 However, all in all users of the device are generally satisfied with the meade ETX125 as long as they understand what they’re getting for the money, which mind you, is still quite expensive for the specs in my opinion.

The eyepieces are decent for what they are but, they’re mediocre in build quality and the 26mm eyepiece has a recessed lens meaning the eye relief is really poor on it.

So if you’re planning to observe wearing your glasses, you may not find that particular eyepiece to be any good for you. Nevertheless, they’re of decent quality and will get the job done.

If the Meade ETX125 isn’t exactly what you’re looking for, whether it be the lower specifications or if you’re more interested in astrophotography, you can click here for my list on great astrophotography telescopes to invest in or click here for a list on some computerised systems that are more powerful than the meade.

The Meade ETX125 Observer ultimately a pretty solid device but, with a few things that may not make it the ideal telescope for you, whether it be the price, the extra expense of a DC power supply or the very sub par astrophotography performance for the price.

But, if these are things you can live with, this system is definitely a solid offering and it won’t dissapoint all that much. Then again if you’re after power, you could spend $500 or less on an 8 inch Dobsonian device and get a lot more out of it.

Of course without a GoTo computerised mount to guide you towards a celestial object, you will need to try a fair bit harder to locate what objects in space but, if power is a factor you’d rather have over convenience , I’d suggest checking out the Zhumell Z8.

Nevertheless, the Meade ETX125, from the research I’ve done on it, does appear to be a very solid device.

==>Click Here To Check The Meade ETX125’s Pricing On Amazon!