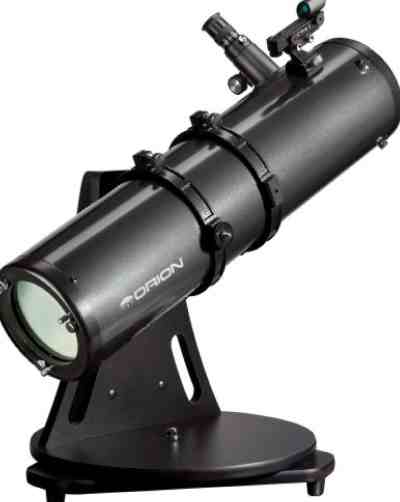 If you’re in the market for a portable yet powerful device, there’s a good chance that you’ve been recommended the Orion Starblast 6 Astro or maybe you’re looking at a telescope for your friend or family member.

So the reason find yourself on this review is to decide if this system is for you right?

Within this post I’ll aim to break down the pros, cons and other features of the Starblast 6 to help you decide whether the device is worth purchasing or something you should skip out on.

How Do The Orion Starblast 6 Astro’s Optics Work?

The optics used within the Starblast 6 is Newtonian reflector, which means that the images for the most part will be very clear and unaffected, unlike the chromatic aberration that’s present within a lot of refractor devices.

The other variation of telescope is the compound variant but, those tend to cost a lot more. If you’re thinking about getting a similarly powerful 6 inch device, they’d be upwards of $500 however, they do also fix most of the issues present within the 2 other variations of optics so, I guess it’s decent price to pay for a better overall experience but I digress.

The great thing about a reflector system is that they don’t suffer from chromatic aberration and are able to observe all kinds of faint and bright lights in space unlike a cheaper refractor, but when viewing the wider expanse of space they do suffer from some distortion on the edge of your view, otherwise known as comatic aberration.

This is a very minor problem and can be fixed by using coma correctors.

The other issues you could point out when it comes to reflector systems is that because the optics are exposed, you’ll need to regularly maintain it and collimate the device every time you bring it out for use.

This isn’t a huge problem because with a bit of time you’d be able to do it within minutes but, it’s definitely a minor inconvenience.

What Do The Orion Starblast 6 Astro’s Specifications Mean?

As for the specs of the Orion Starblast 6, they include an aperture of 150mm, a focal length of 750mm which results in a pretty wide focal ratio of f/5.

The aperture of the device means that it’s able to theoretically achieve a max magnification of 300x, which due to the Starblast 6’s roughly $350 price tag means the actual useable magnification won’t be too far off the theoretical number.

The focal ratio that the Starblast 6 has does mean it’s view will be fairly wide so, capturing more detailed views of planets won’t be on par with devices of f/8 ratios and above but, at the upper end of the starblast 6’s power, you should definitely be able to see a lot of the planets in our solar system with a few possible to viewed in very solid detail.

With the starblast 6 you should be able to see :

One downside to the reflector optics is that you can’t use it like a make shift spotting scope to observe objects on earth unlike the other 2 telescope variations but, that’s probably not going to be to big of a problem anyways considering you’re buying a “telescope” mainly due check out things in space.

Lastly, perhaps the starblast 6’s stand out feature, is the fact it’s a very portable and lightweight 6′ device.

With it’s dimensions and weight being 81.3 x 53.3 x 50.8 cm by 10.7 kg respectively, it’s atleast 40 – 50% lighter than the majority of systems within this range and is probably one of the reasons why the starblast is a little bit expensive for the specs.

If portability is very important to you, the starblast 6″ should be one that’s near enough at the top of your list.

The accessories that come in the box include a 25mm and 10mm Sirius Plossl 1.25″ eyepieces, EZ Finder II aiming device, eyepiece rack, Starry Night software and a fair few other miscellaneous manuals and paperwork.

The accessories do appear to be of solid quality, the EZ finder is a battery powered red dot variant and once attached should make it fairly easy to align the mirrors, whilst the two plossl eyepieces are decent entry level items that will more than get the job done in the beginning.

Of course their designs mean you won’t always be able to capture the most details or have the best contrast when viewing and of course the the 10mm eyepiece won’t bring out the maximum power from the system so, you will definitely need to consider looking into some smaller mm eyepieces in the future.

If you want some help in that regard I’ve made a list on some of the better eyepieces to look into, if you’re curious about what I recommend, I’d suggest clicking here.

I guess you could say that the tabletop mount is also an accessory so, I’ll cover the quality of that item on this section of the review.

The mount that’s used with the Starblast 6 is an AltAz Dobsonian style mount that comes fully assembled in the box and provides a smooth motion when turning left, right, up, down and anywhere within a 360 degree motion.

It also includes a tension adjustment knob which allows you to set the right friction so that the optical tube does not move on its own and also so you can adjust it in order to counter balance any extra weight from accessories you add on top of it, such as a Barlow lens or heavier eyepieces.

There’s an eyepiece rack built into the side of the mount which can hold up to 3 eyepieces. The tube rings on the mount also allow you to adjust the angle of the telescope to allow for more comfortable viewing whilst unlike its smaller brother in the Starblast 4.5 Astro, you can also attach an altazimuth or equatorial tripod mount.

But out of the box, the mount is a tabletop which means in order to view it comfortably you ideally need to place it on a sturdy surface well above the ground.

The mount does appear appear pretty solid, and if you can accept the tabletop design, it shouldn’t cause you too many problems.

What Are Users Of The Orion Starblast 6 Astro Saying?

For the most part, users of the device have found it to be a very solid telescope to go for, especially if you’re looking for portability and good power in the same package. 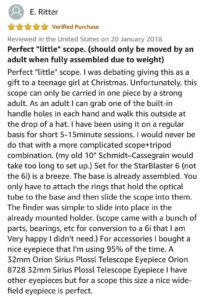 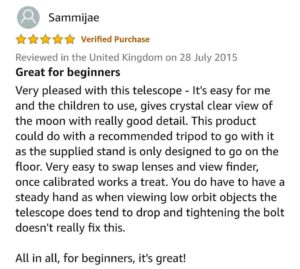 Users are also said that the fact its easy to use is a plus however, there are a few users who didn’t quite like some things about the device. Most complaints are regarding the pretty mediocre finderscope and one person in particular, found that the image quality of the starblast in comparison to other similar systems, was lacking. 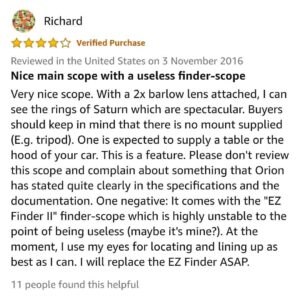 Nevertheless as a whole, the user experience from buyers did appear to be very solid.

If you’re not interested in purchasing a device that requires regular maintenance and would instead prefer investing in a refractor based telescopes, you can check out this list I created on some of the best refractor telescopes by clicking here.

If on the other hand you simply want a system better suited for astrophotography, you can check out this list on what I deem to be among the better systems in that market.

Overall, the Orion Starblast 6 is a solid device, it provides good power, it’s relatively potable and it’s an easy system to set up and use however, it does cost a fair bit more than equally component 6 inch devices where it’s roughly $70 more than them. You could even choose to spend an extra $40 to purchase a more powerful 8 inch system.

So, in terms of value the starblast is a little lacking, however this doesn’t mean it’s a bad telescope, it’s actually a pretty solid offering but, it’s also a system you should mainly go for if you really only want a super portable device, in opinion atleast, which is an area it really shines in.