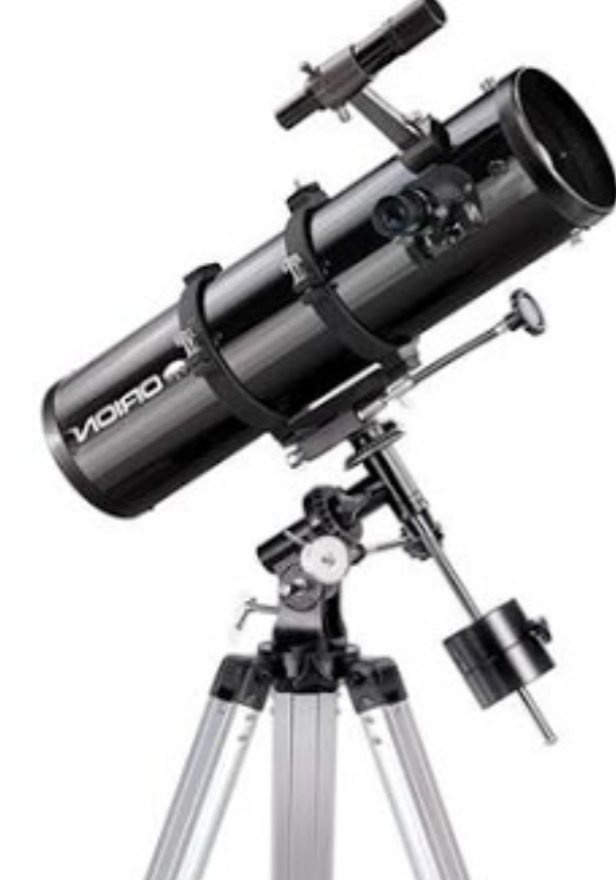 In this review I’ll cover the pros, cons and the Orion Spaceprobe 130ST’s features to ultimately help you decide whether it’s a beginner level GoTo telescope worth investing in or one that you should skip. 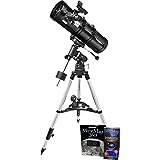 How Do The Orion Spaceprobe 130ST’s Optics Work?

All telescopes tend to come in 3 different optical variations, namely reflector, refractor and compound optics, which of course are further broken down into sub categories.

The Spaceprobe 130ST comes with reflector optics inside the tube which in this case is a Newtonian reflector variant. What this means is that the primary mirror inside is of a parabolic nature which provide a fairly crisp image when aligned appropriately inside the tube.

This is obviously quite a good thing and far better than the spherical mirror that cheaper telescopes tend to have (for a more in-depth look I’d advise reading this article we’ve written on the differences between spherical and parabolic mirrors).

With that being said, the core pros and cons of most reflector based telescopes are for the most part the same so I’ll list what they are down below.

The pros of the optics within the spaceprobe include the following :

Overall, the fact that the Spaceprobe 130ST uses a parabolic mirror as it’s primary mirror does mean it should provide a fairly  good viewing experience for most beginner level users and more intermediate individuals shouldn’t really have much of a problem either.

The main reason I say this is because the collimating (alignment of the 2 mirrors inside the tube) should be far easier to do and in turn will result in a crisper more focused image.

What Do The Orion Spaceprobe 130ST’s Specifications Mean?

The 130ST has an aperture of 130mm, a focal length of 650mm resulting in a focal ratio of f/5. This means the Spaceprobe should be pretty solid for viewing the wider expanse of space. It’ll still do a fine job for planetary viewing although it won’t provide the most detailed of looks.

As for the power, the 130ST should theoretically be able to achieve a max magnification of 260x although real world usage will be closer to 200x.

Even still with this level of magnification you’ll be able to view the following celestial objects :

The dimensions and weight of the device are decent enough for most individuals. The dimensions come in at 61 x 61 x 129.5 centimetres whilst its weight comes in at 10.9kg.

Both these specifications mean that for most individuals it shouldn’t be too much of pain to carry it around whether it be moving it to a new room or place in car to find a good astronomy spot outside. In short the 130ST is reasonably portable.

The 130ST comes with 2 1.25″ plossl eyepieces at focal lengths of 26mm and 9mm, a 6×30 finder scope, 1.25inch rack and pinion focuser, tripod accessory tray, collimation cap, Starry Night astronomy software along with a bunch of other miscellaneous documents.

The accessories for what they are will get the job done and will prove to be solid for viewing the closer planets and even a more wider view of the universe as a result of using the 25mm eyepiece. With that being said an upgrade to a smaller focal length eyepiece or even a Barlow lens will be necessary in order to achieve the maximum power with the device.

One of this telescopes weakest features has to be its EQ-2 mount which isn’t very stable and will more than likely produce a shaky experience when trying to view through the lens. This mount is generally better for smaller devices but, in exchange for the solid optics this is quite the common set back for cheaper telescopes in the current market.

What Are Users Of The Orion Spaceprobe 130ST Saying

The two major issues users had with the 130ST were it’s hard to understand instructions which generally resulted in users struggling to set the device up and the shaky mount that it uses. 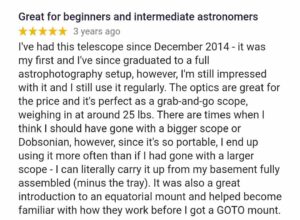 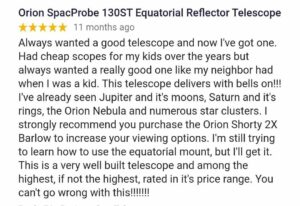 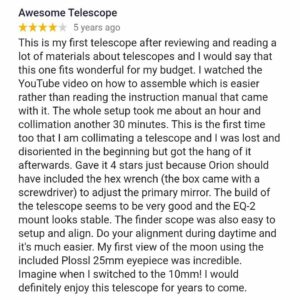 Other than these two points, the spaceprobe seem to be a very solid beginner level reflective system.

The 130ST is among the better telescopes for its price so I not against buying it if it does appeal to you nevertheless, if you want to look into other more powerful yet reasonably priced telescopes, this list for our recommended telescopes for $300 or less may be helpful.

Furthermore, if you’re thinking about getting into astrophotography which is among the weaker features of the 130ST, this list may be worth checking out.

Overall the Spaceprobe 130ST is a very competent beginner level telescope with good specs and accessories for the price. Of course it also has its shortcomings mainly being the subpar/shaky mount and the hard to understand instructions when setting the device up.

Nevertheless, considering it appears to go for around $200 – $300 at the writing of this review, it certainly wouldn’t be a bad device to pick up.