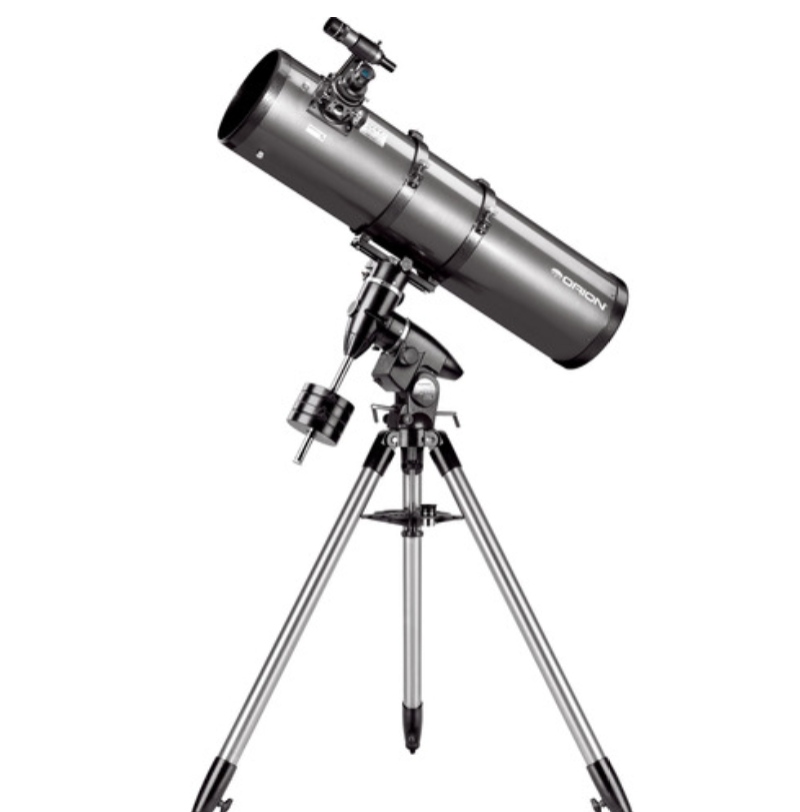 In this review I’ll cover the pros, cons and the SkyView Pro 8’s features to ultimately help you decide whether it’s a intermediate level telescope worth investing in or one that you should skip instead.

How Do The Orion SkyView Pro 8’s Optics Work?

If you were unfamiliar with the 3 main optical variations, they basically include refractor, reflector and compound based optics, where in this case the SkyView Pro utilises reflector based optics.

The optics used here are newtonian reflector based however, through my research I did discover that due to a few manufacturing issues (as SkyView optics tend to be manufactured in China), the optics aren’t truly newtonian. This may be as a result of under correction on the primary parabolic lens or even turned down edges which results in spherical aberration.

This isn’t something that most newtonian reflector devices should do but, due to poor manufacturing the optics within the SkyView Pro could be mediocre to sub par in performance, at least in terms of their quality.

Now if you do get well made optics within the SkyView Pro, then you would be fine however, even if the performance from the optics should theoretically be positive, there is still a chance that the quality won’t be as good as other 8 inch newtonian reflector devices.

Anyways, with that potential con out of the way, some of the pros of reflector optics include the following :

And the other potential cons include the following :

What Do The Orion SkyView Pro 8’s Specifications Mean?

The SkyView Pro has an aperture of 203mm,a focal length of 1000mm resulting in wide and fast focal ratio of f/4.9. What this means is that theoretically the telescope will be able to achieve a max magnification of 400x and that it’d be better for more landscape/wield field viewing as opposed to planetary (although it will be competent at this too).

However, as is the case with reflector devices with lower focal ratio’s, the SkyView Pro will suffer with coma and potentially spherical aberration too.

Nevertheless, you should be able to view the following objects with this device :

Of course in terms of portability the SkyView Pro is not going to win any awards because when fully assembled it will weigh in at a heavy 25.7kg. Of course you can still separately move the optical tube and tripod but, even then kids will likely have trouble moving the pieces around without help as will some adults who aren’t very strong either.

In terms of its dimensions, the SkyView Pro is pretty big too with dimensions of 102.4 x 50.8 x 25.7 centimetres. In short, one of the most irritating things about this device is how heavy it is therefore, if you don’t want to deal with this, especially considering it’s an 8 inch device, the SkyView Pro won’t be for you. 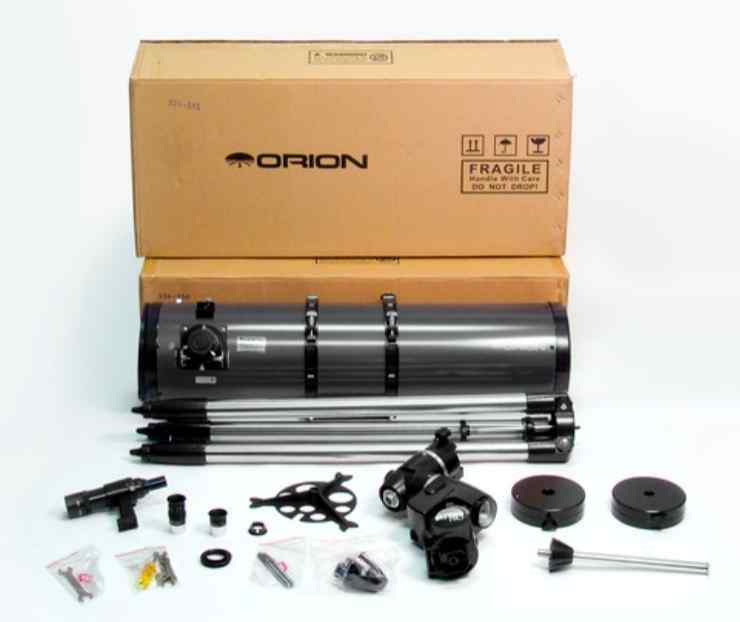 The eyepieces provided are pretty typical for this price range but, they won’t really get the most out of the SkyView Pro’s performance so, that is definitely something worth upgrading (this list of ours may help you pick a solid eyepiece if you’re interested).

The 8 x 40 finderscope, although usable, is a bit too small for an 8″ device whilst the 2″ crayford focuser is pretty solid and should get the job done.

The mount that comes with the SkyView is Orion’s SkyView Pro mount however, even though this mount is technically good and would be sufficient for astrophotography, it isn’t actually good with the 8inch telescope that comes with it.

The maximum capacity of this mount is at best 9kg where as the tubes 7.5kg weight already is putting the entire system near enough its full capacity. If you add eyepieces, dew heaters among other accessories you’d be at the peak of this mounts capacity.

Now imagine adding a dslr to the mix in order to take solid astrophotography images as this device is advertised as. In short the mount for this specific 8 inch OTA telescope tube is way too small meaning the SkyView Pro’s mount unfortunately misses the mark.

Furthermore, it has some issue with build quality where the RA and DEC knobs tend to come off constantly. On top of this it is built quite cheaply which is a problem.

It doesn’t stop here either, there are also issues regarding how comfortable it would be to view as occasionally you will have to look through the eyepiece at awkward positions.

Overall, the mount itself isn’t terrible (it is quite decent in fact) but, it certainly isn’t a worthy astrophotography mount for as heavy a tube as the one provided here and it has the occasional build quality issues too.

What Are Users Of The Orion SkyView Pro 8 Saying

A lot of users have found it to be a great system but, it was often described as being too heavy, the mount seems to have a build quality issue according to some users and others didn’t find it to be very friendly for causal visual users. 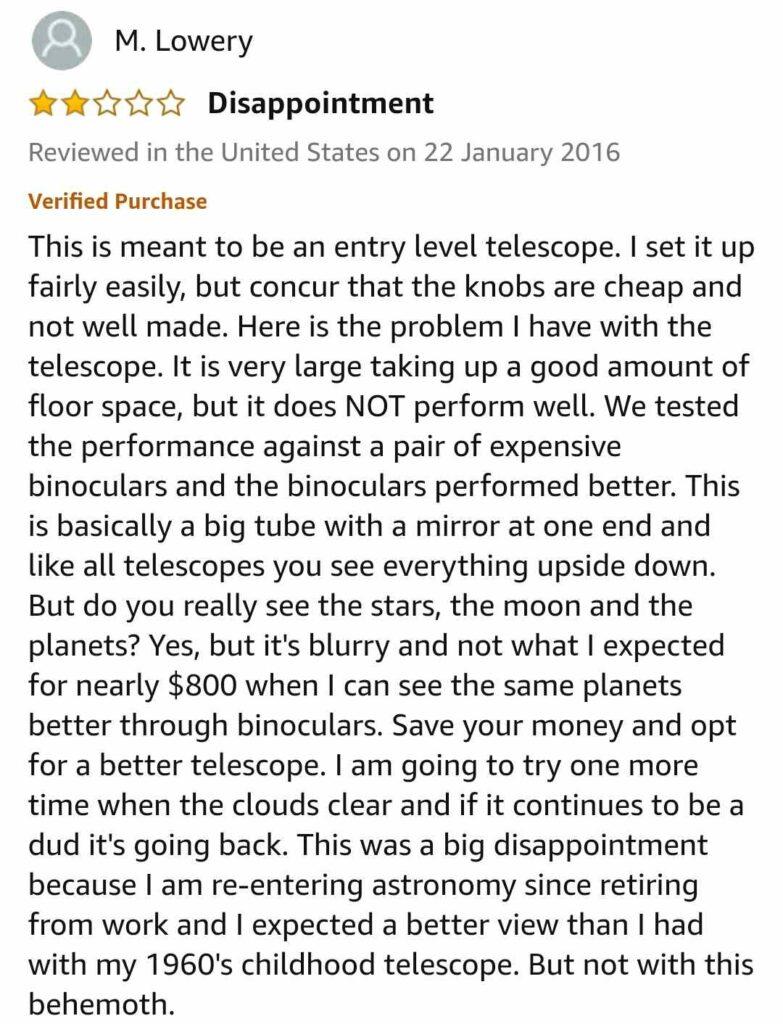 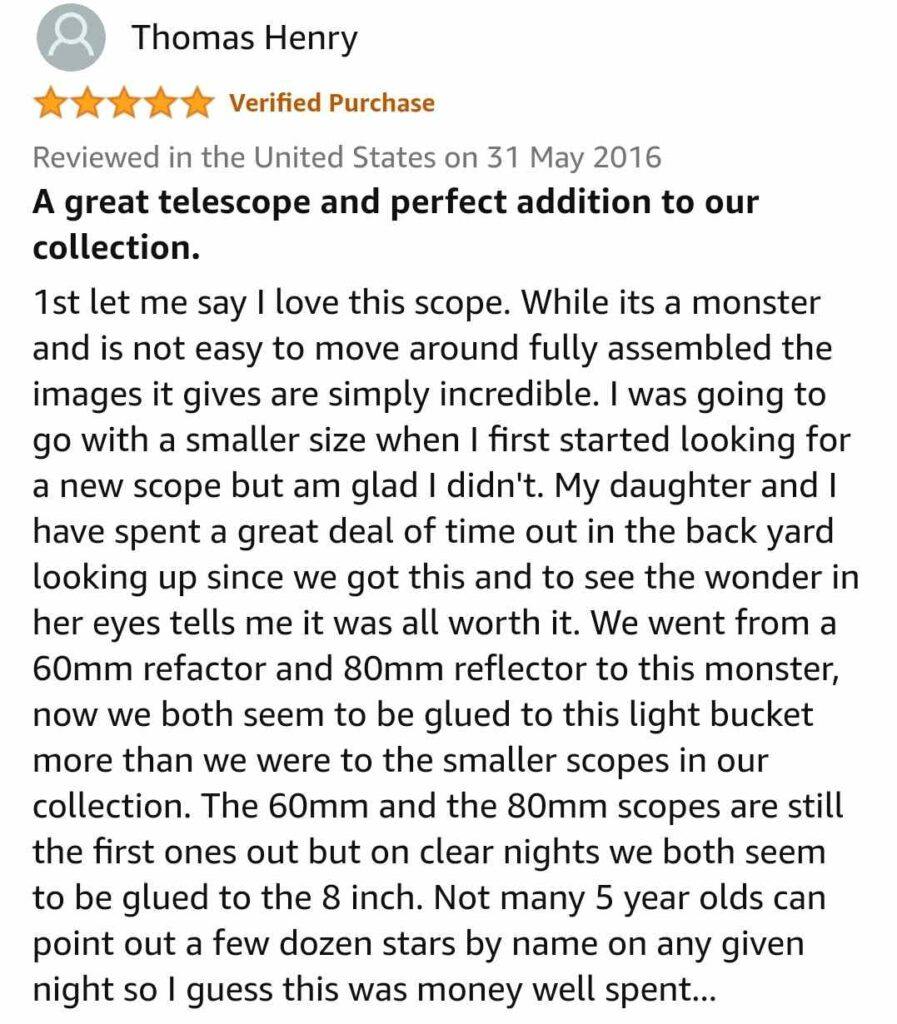 With that being said the majority of users did find the SkyView Pro to be a competent device and it worked well for them, even when taking some very simple astro images of planets.

Ultimately as a astrophotography device the SkyView Pro falls short and as a visual device, taking into account the issues with manufacturing , even if the telescopes light gathering abilities are solid it still doesn’t hit the mark here. So personally I would recommend looking at a Dobsonian device like the Zhumell Z8 or the Skyquest xt8 for a better experience when it comes to visual.

If you’re still after an astrophotography device, I’d suggest checking out our list covering the best devices for the activity by clicking here.

The Orion SkyView Pro is a very mixed bag of a device, especially when you take into account the price you’re paying for it with the performance and build issue problems that come with it.

Firstly, its optics although great at capturing light are potentially suspect, the mount is too small to actually participate in astrophotography whilst being built cheaply, the inbox accessories are average at best and it’s also very heavy to boot.

I’m not saying that the SkyView Pro is a bad device because clearly a lot of people are happy with it but, it certainly wouldn’t be my first recommendation as a normal visual telescope or as an astrophotography device.