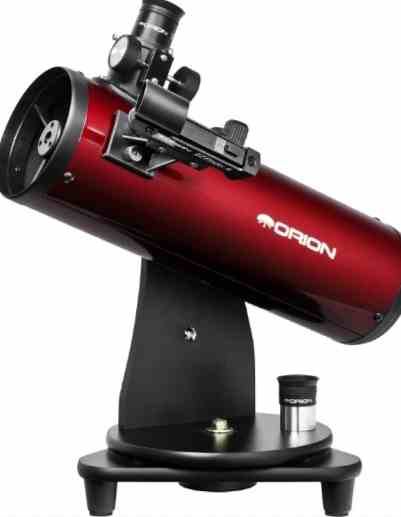 In this review I’ll cover the pros, cons and the SkyScanner’s features to ultimately help you decide on whether the system is worth investing in or a beginner level device that you should skip out on.

How Do The Orion SkyScanner’s Optics Work?

Telescopes tend to come with optics that fall under one of 3 variations namely a reflector based system(mirror based), a refractor deisgn (glass lens based) and compound optics (a combination of the previous 2 optics).

The Orion SkyScanner has reflector optics inside, which according to its specifications is the Newtonian reflector variation. What this means in that the primary mirror inside the tube will be designed to be parabolic which will allow users to view a more focused image through the eyepiece.

The reflector design has its fair few pros to it, some of which include the following :

Of course it also has its cons too, which include the following :

I know that it looks like reflector scopes have more cons than pros but, these issues are mostly minor niggles. The optics for the most part are solid within the SkyScannner considering the device itself only costs $100.

What Do The Orion SkyScanner’s Specifications Mean?

The Skyscanner has an aperture of 100mm, a focal length of 400mm resulting in very fast and wide focal ratio of f/4. This does mean that the coma it’ll suffer from will be more prevalent and that it won’t necessarily be the best device for viewing planets but it should still be very capable considering its price.

Its theoretical max magnification will be around 200x although real world usage will place it around 150x, nevertheless this kind of performance on a budget device is still very reasonable.

As for what you’ll be able to see with the Skyscanner, it includes the following :

Now regarding the portability of the device, it comes in at a very reasonable weight of 2.8kg when fully assembled. In fact this could even be a little too light and may result in some shaky viewing nevertheless, if you want portability the Skyscanner is solid device. As for its dimensions, they’re more than manageable too coming in at 53.8 x 32 x 24.6 centimetres.

The accessories provided in the box include 2 1.25″ kellner eyepieces at 20mm and 10mm focal length, a AltAz Dobsonian mount, a EZ Finder II reflex sight and a bunch of other miscellaneous documents.

The accessories provided aren’t necessarily the greatest, particularly the eyepieces but considering how cheap the device is as a whole it probably won’t be too much of a pain to invest maybe another 30 – 40 bucks on some better eyepieces or a Barlow lens to maximise the Skyscanner’s performance.

Another awesome thing about the skyscanner is that it comes near enough fully assembled right out of the box with users only being required to assemble the finderscope.

As for the mount, it’s a very solid one that that comes with a Tabletop variant right out of the box so, if you have a sturdy enough surface to place it on, the viewing experience should be fairly smooth considering the smooth turning motion left to right. The tension for the movement can also be adjusted by using the adjustment dial on the side.

If you’re thinking about using a tripod to use the SkyScanner when standing up, due to the 1/4 20 mount point it uses at the center of the dovetail you should be able to use any typical photo tripod. This isn’t a feature that very many if any sub $100 telescopes tend to provide so it is honestly a very nice touch.

Overall the mount is very solid and will satisfy the majority of beginners.

What Are Users Of The Orion SkyScanner Saying

Users have found the Skyscanner to be a very value rich beginner level Newtonian reflector from the easy to assemble nature of it to the great portability of the device. 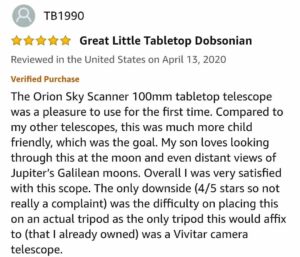 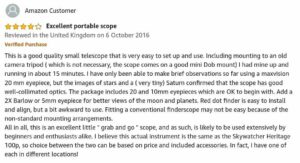 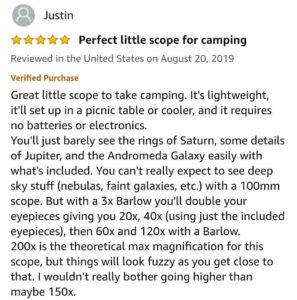 The only major complaint for the device as a whole seems to be with the placement of the focuser being at the top as opposed to more at 60 degree like most other telescopes.

Of course if this is something you believe is easy to overcome or is a sacrifice you’d be willing to make for the 1/4 20 mount points for a tripod, the Skyscanner should be a very competent telescope.

If your budget is within the $100 – $150 range the Skyscanner definitely should be near the top of the list however, that doesn’t mean there aren’t better alternatives. The Zhumell Z100 or even Zhumell 114 are very solid picks for that price range.

If your budget extends further than that and if you’re after a more powerful device as a whole the Orion SkyQuest XT6 is great albeit more expensive alternative to look into too.

Overall I do believe that the Orion Skyscanner 100mm is a very solid device that will satisfy pretty much every beginner out there. You can’t really go wrong with it if you pick it up as a first telescope for yourself, a friend or family.

Yes, it’s clearly not the best performer in the world and yes the focuser is placed a little awkwardly at the top of the tube as opposed to side but, if you’re on a budget, there aren’t many devices better than this one.

==>Click Here To Check The SkyScanner’s Pricing On Amazon!