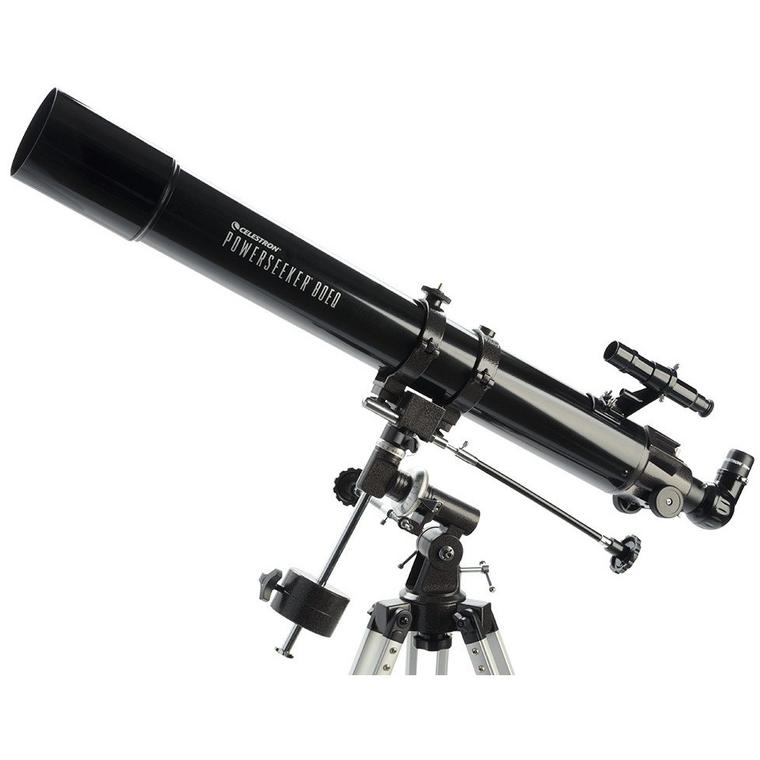 In this review I’ll cover the pros, cons and the 80EQ’s features to ultimately help you decide on whether the system is worth investing in or a beginner level device that you should skip out on.

How Do The PowerSeeker 80EQ’s Optics Work?

Telescopes tend to come in one of 3 optical variations within their tubes, with these 3 being reflector, refractor and compound optics. The PowerSeeker in this case is a refractor based telescope which means the optics within are glass lenses enclosed inside the tube. (here’s a more in depth look at each variation).

As is the case will all 3 different variations, they will have their pros and cons, which is what I’ll go into more detail next.

The pros of the optics within the PowerSeeker 80EQ are as such :

The refractor optics within the 80EQ are actually decent and will be more than useable if you decide to pick the device up. Of course I’m sure you’re curious as to what you’ll be able to view with it based on the specifications, which of course is what I’ll be covering next.

What Do The PowerSeeker 80EQ’s Specifications Mean?

The 80EQ has an aperture of 80mm (3.15″),a focal length of 900mm resulting a focal ratio of f/11. What this means is that theoretically the device will be able to achieve a max magnification 225x although considering the device is a cheaper, real world use would mean it’d probably achieve around 150 – 160x max of useable magnification.

The focal ratio of f/11 means that the chromatic aberration refractors tend to suffer from will minimised and the views will be narrower too, making a solid scope go planetary viewing.

As for what you’ll be able to view with the PowerSeeker 80EQ, it can be following objects in space :

The weight of the 80EQ is very manageable coming in at 6.3kg when everything is assembled. As for the dimensions of the tube, it comes in at 98.1 x 32 x 24.4 centimetres.

There isn’t much information on the size of the tripod provided but, going off of information from other similar sized telescopes, it’ll likely allow the 80EQ to reach a a maximum height or around 1.3m.

The 80EQ comes with a fair few accessories within such as one 1.25″ kellner eyepieces at 20mm and another Ramsden 4mm, a PowerSeeker 3x Barlow lens, a smartphone adapter, an EQ-1 German equatorial mount, a tripod among other documentation.

The accessories aren’t terrible considering the price but the potential max magnification of 675x when using the equipment is a bit overkill and won’t really amount to much usability.

As for the mount, it’s the same one the larger PowerSeeker EQ telescopes provide which when used with those systems suffered a lot from stability issues as they were too big for the mount however, for the 80EQ the mount is actually very solid and transitions quite smoothly when in use.

What Are Users Of The PowerSeeker 80EQ Saying

People seem to genuinely like the 80EQ and believe it to be a solid beginner level telescope, particularly when it can be found on a deal. 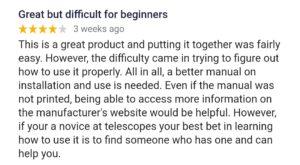 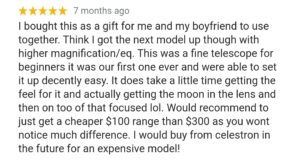 If the power of the PowerSeeker isn’t quite to your liking and you want to keep to a fairly budget of $300, we’ve created a list covering some of the best budget telescope alternatived here.

The PowerSeeker 80EQ is a solid beginner level telescope which can sometimes even be bought at a steal for less that $100 even though on average it tends to be $120 – $150.

It does have its limitations as a result of its pricing and of course if you were to buy it, an upgrade on the eyepieces would more than likely be necessary for the best experience but, as a first time telescope I can’t say it’d be a bad option to go for.