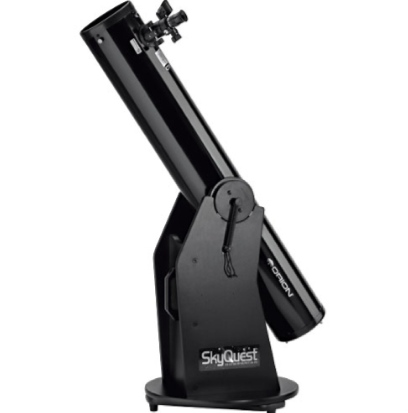 How Do The Orion SkyQuest XT4.5’s Optics Work?

The SkyQuest XT4.5 uses what can be referred to as a spherical reflector optic, which is generally cheaper to manufacture than the commonly used Newtonian reflector optics and in turn suffer from a visual abnormality known as spherical aberration.

What this means is that it’ll be harder to align a finderscope and lock on whatever you’re planning to view with perfect clarity using the XT4.5.

That being said, although the optical performance may not be the clearest when observing through the lens, it still will have a few benefits over the other 2 core optical variations that come with refractor and catadioptric telescopes.

The pros of the reflector optics within the XT4.5

As for the cons they include the following :

The collimation side of things with the SkyQuest XT4.5 will get better over time because the more you use it the more you’ll understand how to align the mirrors.

Cleaning it will also be a chore but, even though it will need to be cleaned more often than a refractor or catadioptric telescope, as long you buy and keep a dust cap on, the cleaning should still be manageable.

If you want to learn how to do so properly, check out this article written on the matter.

What Do The Orion SkyQuest XT4.5’s Specifications Mean?

The SkyQuest XT4. 5 has fairly decent specs for its roughly $220 price tag with an aperture of 114mm, a focal length of 900mm resulting in a focal ratio of f/7.9. This means that in terms of maximum magnification it’ll let you look out into space at a roughly 228x magnification though real world use would mean the numbers will be slightly lower.

The higher focal ratio also will reduce the spherical aberration a decent amount too so the images shouldn’t really come out as unclear as smaller focal ratio devices although the clarity and focus will still be average at best.

Nevertheless, at the right magnification levels the XT4.5 will allow you to observe a fair few celestial objects in good detail.

Some of these entities that the SkyQuest XT4.5 can see include :

The higher focal ratio also means the XT4.5 is far better for viewing planets due to the narrowerness of the lens. This also means that it’s capability with wider views of the stars in the sky will be somewhat limited although this isn’t really a knock on the XT4.5’s optics because it should do reasonably well on both types of observations.

Having only a 4.5″ mirror, the XT4.5 is of course decently portable. This is because with a milk crate, or anything of equal height placed underneath, you should be able to get a great view using it whilst sitting down as an adult and of course it’ll be a comfortable experience for children to view through when standing up too.

In regards to the XT4.5’s dimensions and weight, they are of course fairly reasonable with the height only being 89cm and the weight being fairly lightweight at 8kg when fully assembled.

The dimensions of the device shouldn’t be very much of problem for most either although it definitely is larger than the similarly powerful Zhumell Z114 or Lightbridge Mini 114, both of which use tabletop mounts so, if absolute probability is what you’re seeking the SkyQuest XT4.5 certainly isn’t our top choice.

The SkyQuest XT4.5 comes with 2 1.25″ plossl eyepieces at 25mm and 10mm, a 6×26 finderscope, a 2x Barlow lens, a cheap red flashlight, a plamisphere, a long with a few miscellaneous documents.

The eyepieces included in the box are genuinely really good for the price range and will definitely perform better than the cheaper kellner eyepieces that tend to be supplied with telescopes at this price and the 2x Barlow lens is pretty solid.

The only item that lackluster is the included finderscope as the images you’ll see through it will be very dim, which is worsened further due to the erecting prism in the finderscope.

Nevertheless, as a whole, besides maybe upgrading the finderscope in order to see better lit images, the out of the box XT4.5 experience isn’t half bad for the price.

As for the mount, it’s of the Dobsonian design and uses a spring-tensioned mount just like the bigger variants in the XT6 or XT8.

The only significant difference between the XT4.5’s mount over the other 2 is the use of a 0.5″ thick particle board as opposed to a 0.75″ thick particle board. The design of the base is also a little awkward for balancing the mount on taller surfaces however, all in all your experience with dobsonian mount should be very solid

What Are Users Of The Orion SkyQuest XT4.5 Saying

Most people who decided to invest in the SkyQuest XT4.5 did find it to be a solid beginner experience and a great place to get started although the assembly process and initial set up does appear to be a little bit of pain to deal with. 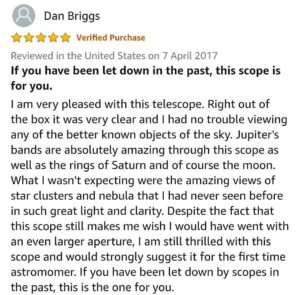 The issues for the most part are small in nature so I wouldn’t worry too much about them when it comes to deciding if the XT4.5 is worth it.

The only major problems I guess you could say that the SkyQuest XT4.5 has is its choice of using the less capable spherical mirrors for the optics and it’s price being a fair bit higher than other similarly powered telescopes such as the Zhumell Z114 or meade Lightbridge Mini 114.

If you’re willing to spend maybe an extra 50 – 70 bucks, you could just as easily purchase a significantly more powerful device like the SkyWatcher 6 inch for example. That being said although the XT4.5 is a great $220 – $240 telescope, it does sit in awkward limbo place in terms of pricing

From my research, besides maybe the subpar mirror design and slightly expensive costs when compared to other similarly powered telescopes, the XT4.5 does deliver well in all areas, relative to its pricing of course.

Nevertheless, if you have a bit of extra money lying around I’d definitely recommend upgrading to a SkyQuest XT6 or even the SkyWatcher 6″ however, if your budget stretches only as far as the XT4.5, I can’t really say that it’ll be a bad decision to purchase it.