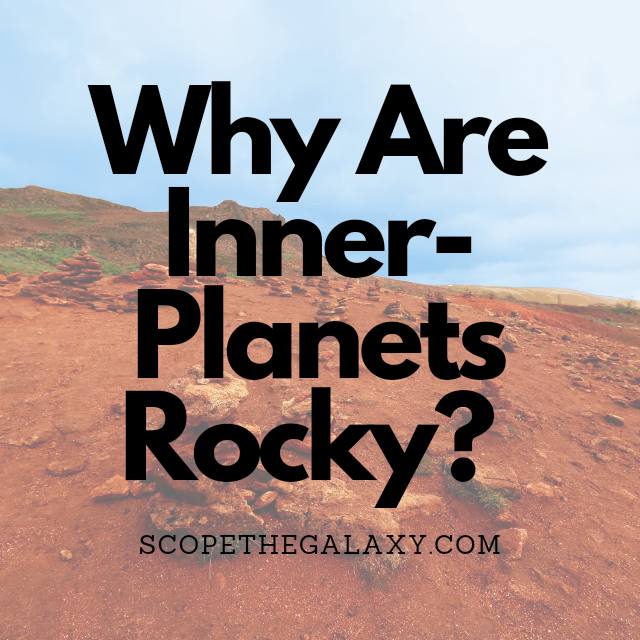 Inner planets are rocky thanks to their proximity to the sun. The heat emitted from these giant stars means that only materials with the highest melting points can survive, such as metals and rocks. These materials collide and join to form the base of a rocky planet.

Continue reading to discover how these rocky clumps evolve into terrestrial planets and why the outer planets become gas giants. Find out if Earth is the biggest terrestrial planet and why TOI-849b is so special.

How Were The Inner Planets Formed?

At the beginning of the formation of our solar system, the sun did not yet exist. Instead, we had a big ball of gas (mostly hydrogen and helium) that scientists call a protostar. This protostar did not possess sufficient energy at its core to create heat reactions.

During this time, the protostar was surrounded by materials that would eventually form into planets. We can split these materials into four distinct categories: metals, rocks, ices, and light gases; each material melts at a different temperature.

The protostar was already hot, even though it was not generating heat, so only the materials with the highest melting points could exist close by. These materials included metals such as iron, which we find at the core of our Earth.

The inner planets of the solar system originated when particles in the solar nebula collided with each other. Over time these masses formed into planets through a process called accretion, which literally means growth by the gradual addition of layers or matter. As more layers joined these rocky clusters, the size of the planets continued to grow.

With the pressure and temperature in the core increasing, the center of these planets started to liquify. On Earth, we can see a liquid iron core with a mid “mantle” layer and a rocky crust. In this type of structure, the heavier elements sink to the core, while lighter elements float to the top. These lighter elements can then cool and solidify to form the crust.

The complete process of rocky planet formation takes billions of years to occur.

The inner planets of Mercury, Venus, Earth, and Mars are called terrestrial planets, thanks to their compact rocky surface. A terrestrial planet – otherwise known as a telluric or rocky planet – is a planet that is mainly composed of silicate rocks or metals. These planets have the same basic makeup of a central metallic core surrounded by a silicate mantle.

The terminology “terrestrial” or “telluric” derives from the Latin words Terra and Tellus, which mean Earth. We call the inner planets terrestrial because their composition is earth-like.

In contrast to the large gas giants, terrestrial planets have a solid surface consisting primarily of hydrogen, helium, and water in various states. Other characteristics of a terrestrial planet are liquid metal cores, minimal moons, and topological features (volcanoes, valleys, etc.).

In addition, terrestrial planets have secondary atmospheres. This means that the atmosphere was not formed during accretion but through volcanic activity or comet impacts.

Why Are Inner Planets Rocky And Outer Planets Gaseous?

With a greater distance from the protostar, it is cold enough for other materials such as water vapor or ammonia to freeze and form different types of ices on the outer planets.

On Earth, water freezes at zero degrees celsius, but in space, much lower temperatures are needed for materials to condense. The “frost line “defines the point at which space becomes cold enough for this freezing to occur.

Our frost line lies somewhere between the orbit of Mars and Jupiter. Beyond this line, we see the formation of ice plus larger quantities of metals and rocks. Thanks to this abundance of materials, the outer planets can grow larger.

And it’s these large gravitational cores that give them enough force to attract hydrogen and helium gases that are floating around.

Is Earth The Biggest Terrestrial Planet?

Earth is the largest of the four terrestrial planets in our solar system. It is the only one to possess liquid water, making it a suitable habitat for life.

Earth is similar to the other terrestrial planets because it has a heavy metal core and a rocky surface. But, the water vapor in the atmosphere allows Earth to moderate its temperatures more effectively than its counterparts.

This planet is the largest rocky planet ever observed, with scientists believing it may be the remnants of a gas giant’s core.

Like Earth, TOI-849b orbits closely to its star and has a high density that suggests a largely metallic and rocky makeup. TOI-849b is around 40 times the mass of Earth but only three times wider, which is significant because of its gravitational pull.

An object of that density should pull in large amounts of hydrogen and helium, as a gas giant would. But TOI-849b does not and lacks any kind of substantial atmosphere.

TOI-849b has an average temperature of 1,527 degrees celsius and an orbital period of 18 hours (classing it as an ultra-short-period object). This may be the biggest rocky planet that scientists have discovered, and it has some unique features to keep them intrigued.

Terrestrial planets form through a process of accretion. This means that materials gather together in layers over time to create a solid planet.

As the mass grows, so does the temperature, and it’s the increase in this core temperature that changes the planet’s structure.

(183) Why Are the Inner and Outer Planets Different? – YouTube