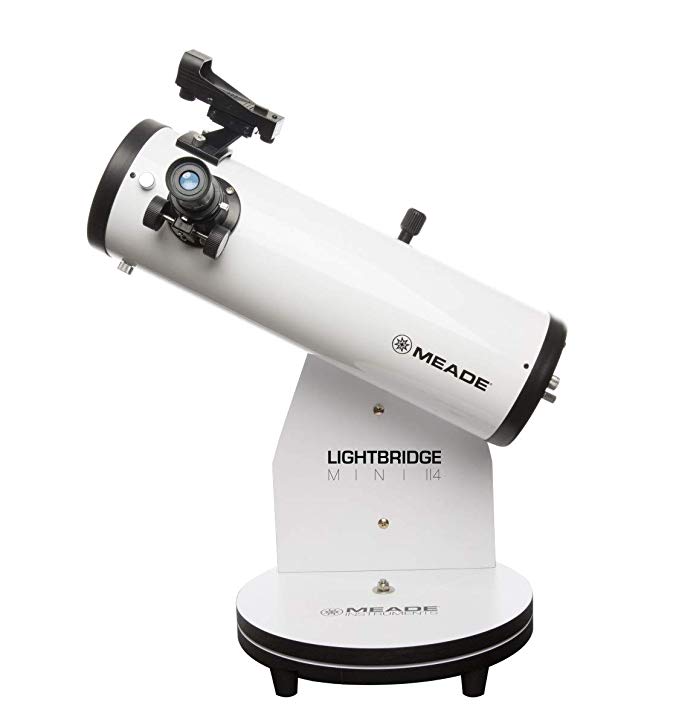 If you’re in the market for an entry level telescope, the Meade Lightbridge Mini 82 is probably one that’s popped up on your radar, which is also the main reason why you’ve found yourself on the review.

This review on the Meade Lightbridge Mini 82 will cover all the core features of the device, the pros, cons and ultimately help you make a decision on whether the device is worth the money or one you should skip.

How Do The Meade Lightbridge Mini 82’s Optics Work?

The optics used within the mini 82 are reflector based and of the fairly cheap and quite hard to collimate spherical design. What this means is that you’ll be hard pressed to see very clear images of any celestial objects when looking past  a certain magnification limit.

This of course does limit the devices overall ability. Then again considering the device can be had for around $60 it shouldn’t really be the biggest of deal breakers for the average user.

That being said I’ll go over all of the other pros and cons of the reflector optics inside the mini 82 starting with the pros :

What Do The Meade Lightbridge Mini 82’s Specifications Mean?

The Mini 82 has an aperture of 82mm, a focal length at 300mm resulting in a focal ration of f/3.7. This means that the device won’t really be great at focusing on singular objects like planets and should theoretically be able to achieve a max magnification of 160x.

Of course the spherical mirror does mean that actual usage will be limited particularly when it comes to sharp views and the lower focal ratio also means coma will be quite prevalent when looking through the lens.

Nevertheless, the mini 82 should still allow you to see the following celestial objects :

Regarding the mini 82’s dimensions and weight, it’s dimensions are 460 x 263 x 209 mm whilst it appears to come in at a very lightweight 1.7kg. It should go without saying that this will be very easy to carry or store for more or less anyone interested in the device.

The accessories included in the mini 82’s box includes 2 MA eyepieces at 26mm and 9mm, a red dot finderscope, a 2x Barlow lens, a plastic 1.25” rack-and-pinion design focuser and a bunch of other miscellaneous documents.

One of the more interesting things about the mini 82 is that the mount (which is a simple tabletop alt-azimuth mount) is directly attached to the tube with a bolt and not through a vixen dovetail attachment. This means that you probably won’t be able to attach the the device to a tripod. This is simply a compromise you’d need to make.

First of all you should know that the mount is made of particle board which means that it can be susceptible to rotting if not looked after probably. If that’s an issue for you it’s definitely worth looking into fixing that by creating your one plywood board instead.

As for how the mount functions, it’s pretty much the same as the mini 114 and mini 130 besides the size difference meaning it uses 3 small teflon pads that attempt to create a smooth turning motion on the singular bolt that the mount is attached at. This should make for a fairly decent viewing experience.

However, as it is a table dobsonian and the device itself is quite lightweight, the viewing sessions won’t always be the most stable.

What Are Users Of The Meade Lightbridge Mini 82 Saying

As the device is quite cheap, it does of course have its fair share of manufacturing issues and the spherical mirror does limit the clarity of images that can be seen. 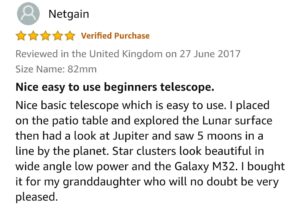 However, at this price range you shouldn’t really expect the clearest of views and those who go in with the expectation of not necessarily getting the best views generally seem to enjoy it. 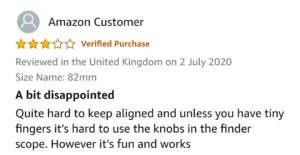 At this moment in time it will likely be very hard to find a new model mini 82 due to it officially being discontinued by meade. Nevertheless, if you’re a beginner level astronomer that’s willing to extend their budget into the $150 range or even the $200 range I can suggest you few alternatives.

The Zhumell Z100 or the Z114 are great options as is the SkyQuest XT4.5. So, if you’re still in the market for a first time telescope like the mini 82, either one of the aforementioned devices should be decent for you.

Although the Meade lightbridge mini 82 has its fair share of shortcomings and is at this moment officially discontinued by meade (although there should still be some models floating around) if you can pick it up for it’s roughly $60 – $70 price tag, it most definitely will deliver, especially if you just want to be able to see up till jupiter whilst retaining solid portability.

At that price range and or of you just want a very basic telescope, the mini 82 is perfect however, if you want to broaden your horizons, one of the bigger and more capable devices I mentioned above are what I would recommend instead as the mini 82 isn’t really that great as a whole.