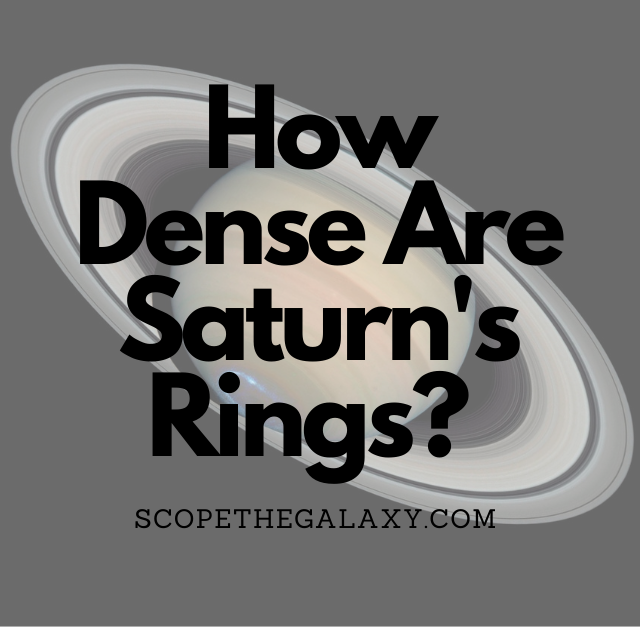 Thanks to its gigantic size and unique ring formations, Saturn is the most recognizable planet in our solar system. While the rings appear flat and smooth, we now know that they are collections of rocks and ice balls that range in thickness from 10 meters to 1km. This may sound like a lot, but it is extremely thin and flat when you compare its width of 280,000km.

The objects in Saturn’s rings range from average-sized rocks to mountain-sized pieces of ice. These particles are mainly composed of water ice with a slight trace of metallic elements. Scientists divide the rings into major and minor formations sculpted by the planet’s gravity and the orbital paths of a range of moons.

How Close Together Are Saturn’s Rocks?

Saturn’s rocks are packed extremely close together compared to most other astronomical objects. Solid particles occupy 3% of the total disk space, and the typical separation between particles is about three times their average diameter. Suppose the average diameter is 30cm; the distance between those particles would be about one meter.

This high density is one of the reasons for the thinness of the disc caused by endless collisions and the dissipation of the kinetic energy of outliers.

The density of Saturn’s rocks varies throughout the different rings. One clue to the density – or closeness – of the rocks lies in the optical depth of each ring.

Very little light passes through the densely packed B rings – an astronaut would need to dig through it. But the A ring is less congested, and the G ring is sparsely packed like a light mist or fog. If we compare the optical depth, we see that the B ring is 0.4 – 2.5, whereas the G ring is 10^6.

Why Are Saturn’s Rings So Thin?

Saturn’s rings are incredibly thin, so much so that they almost disappear when viewed from the side. Most planetary ring systems are flat because of the asymmetric gravity field caused by the planet’s oblate – or equatorially bulging – shape.

In addition, the Roche critical density is lower than any other planet, which means that Saturn’s rings possess a higher proportion of ice to rock than any of the other planets.

The Roche critical density is the lowest density at which an orbiting object can hold itself together at a given point from its planet. This high proportion of ice lowers the overall density of the orbiting bodies.

Ultimately, the rings are flat because of large angular movements from the disc itself – particles conform to a preferred path as any outliers are subject to collisions that obstruct a smooth transition around the planet.

Among the orbiting particles of a planet, some will travel on an inclined orbit, which can be pretty random compared to the other orbiting objects. This random movement makes the outliers more highly susceptible to collisions.

These collisions cancel out the upward and downward motion, which leaves the particles on less inclined orbits.

Over time, the inclining particles will conform to the standard path or be destroyed, leaving only a flat ring behind. The rings of Saturn are 30 million times wider than their height.

How Much Mass Is In Saturn’s Rings? 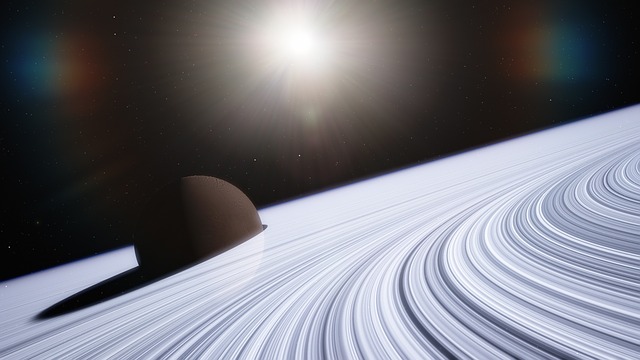 Saturn’s rings weigh about 15 billion billion kilograms in total. This sounds like a lot, but if we compare these measurements to more earthly terms, we discover it is relatively light.

The rings weigh around half the mass of Earth’s Antarctic ice shelf, but they are spread across an area 80 times greater than the entire surface area of Earth.

The mass of Saturn’s rings is something that scientists have struggled to determine for hundreds of years, and it is thanks to the final movements of the Cassini spacecraft that they were able to gain this estimation.

Using the Cassini craft to weave in and out of the rings, then calculating the accumulated data of the gravity of these bands, plus the winds from the planet’s atmosphere, the mass is estimated to an error margin of 25-30%. While this is a large margin, it is the most accurate measurement to date.

Why Are Saturn’s Rings So Noticeable?

The rings of Saturn are primarily composed of water ice. These rings are so noticeable because the ice is the perfect medium to reflect sunlight; they can be seen even through a basic telescope.

Many planets have ring systems, though these are nowhere near as prominent as the rings of Saturn.

The Cassini observations have confirmed that the rings are composed almost entirely of water ice. Still, these are accompanied by tiny amounts of organic compounds that tint them – Carl Sagan called these chemicals “tholins.”

The most prominent structures are in the B ring, which is also the brightest ring of Saturn. If you were to stand on one of these large particles in orbit of Saturn, you would need a spacesuit as the atmosphere is almost a vacuum with average temperatures of -200 degrees celsius.

Within the rings are structures up to 100 meters across. You could theoretically stand on one of these objects, but it would be challenging as their low density makes the gravity weak.

Movement would be impossible as even the slightest nudge could free you from the object’s gravity and send you hurtling into space. And these objects rotate at around 64,000km/hr.

Scientists have discovered seven major rings around Saturn that they have named after letters of the alphabet: A through to G. The rings look solid to the naked eye but are actually composed of billions of individual pieces of rock and ice that orbit the planet.

Some of these pieces are only as big as a grain of sand, while others are the size of small mountains. The rings are constantly changing because the rocks and ice can smash into each other during their orbit and break up into smaller pieces.

If you could grab an average-sized ring particle from Saturn, it would feel like you were holding a thick layer of ice-cold whipped cream with a singular blob of ice cream inside. While only 3% of total disc space occupation sounds minute, it is an incredibly high density compared to other orbital objects.

What do we know about planetary rings? Quite… | The Planetary Society

Why are Saturn’s rings flat? (Intermediate) – Curious About Astronomy? Ask an Astronomer (cornell.edu)

How Close Are the Rocks in Saturn’s Rings (sciencing.com)