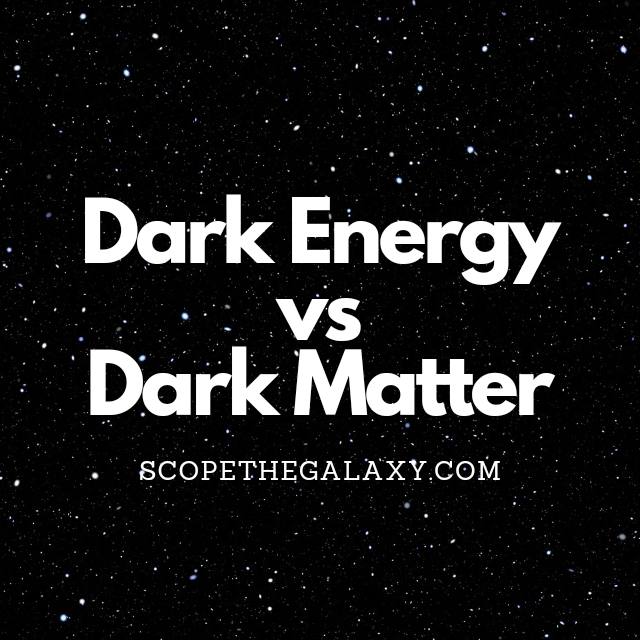 We can think of dark energy and dark matter as the yin and yang of our Universe; the former exudes a repulsive force known as antigravity, while dark matter creates an attractive force that holds galaxies together by using gravity. Together, they comprise 95% of our total Universe, but we cannot see either, making their exact properties a mystery.

Scientists learn about dark energy and dark matter by observing their effects on the matter surrounding them. Continue reading to discover the details of these fascinating building blocks of our Universe, plus the similarities and differences of each.

What Is Dark Energy?

Dark energy is a hypothetical form of energy that permeates all of space and accelerates the Universe’s expansion. The term “dark” refers to the unknown rather than a physical characteristic of the matter. And scientists believe that this energy could make up as much as 68% of our Universe.

The existence and properties of dark energy are inferred from its gravitational effects on the matter and radiation in the observable Universe rather than from direct detection.

Dark energy is one of two hypothesized forms of energy that constitute what physicists call “the cosmological constant.” The other form is dark matter, which does not interact with electromagnetic radiation like light.

The discovery of dark energy was made possible by observing different supernovae in distant galaxies and calculating their distances from Earth to measure how fast they were moving away from us. Dark energy helps scientists to explain what causes this acceleration.

Scientists have observed that galaxies are moving away from one another at an accelerating rate. They have tried to explain the acceleration by looking at the gravitational pull of visible stars and gas. However, they discovered that even if there is a lot of dark matter, it would not be enough to account for the observed acceleration.

This is why they believe there must be some other form of matter, which we cannot see, out there in space, causing this acceleration. Scientists believe that dark matter exists because it helps explain our Universe’s rapid expansion.

What Is Dark Matter?

Dark matter is a form of matter which we cannot see, but it can be detected through its gravitational effects on visible matter. This type of matter makes up around 27% of the Universe, which is still a mystery. When it comes to dark matter, it’s easier for us to categorize what it isn’t rather than what it is.

In addition, we can differentiate dark matter from black holes because black holes are incredibly compact or concentrated, whereas dark matter is scattered through space.

Thanks to dark matter. In a Universe without dark matter, the stars would be spread further apart, and the lack of gravity would prevent galaxies from forming; galaxies exist; the visible matter within the Universe doesn’t possess enough gravity to hold these structures together.

Theories about what dark matter might be range from particles to strings to something else entirely. The only way to determine the truth is through observation and experimentation – which is currently limited. Still, we can make observations of this matter by watching how light behaves around it. If there is a large enough concentration of dark matter, it will bend oncoming light waves around the outside of its mass.

One possibility is that dark matter contains exotic particles (such as gravitinos or weakly interacting massive particles) that interact with matter and light differently than we would expect. But, so far, the only thing we can say for sure is that something exists beyond visible matter; there is a lot of that something, and it interacts with gravity.

Dark matter has been hypothesized to exist for decades, but there are still many unanswered questions about this mysterious substance. Some scientists believe that it may turn into dark energy when it reaches a specific density; others hypothesize that it and dark energy are two separate phenomena altogether.

Current theories suggest that dark matter is composed of weakly interacting particles, while dark energy is an energy source that accelerates our Universe’s expansion. If this is true, each would have an entirely different set of properties; thus, they would not be inter-convertible.

Still, it’s only possible to say for sure whether dark matter could convert to dark energy uoncewe understand more about the properties of each.

How Are Dark Energy And Dark Matter Similar?

The prefix “dark,” which precedes both phenomena, does not mean that the two are related. Instead, “dark” refers to the unknown, the most significant similarity between dark energy and dark matter; we don’t know what either of them are.

Both are invisible and don’t emit light, but both interact with the space around them, making it possible to observe their effects on our Universe.

We can’t see dark matter, but it can be inferred by its gravitational effects on visible objects. At the same time, dark energy is a term for an unknown form of energy that permeates all space and tends to make the Universe expand at an increasing rate. Here are some key differences between the two.

Everything we see around us constitutes only 5% of the total Universe. The remaining 95% is “dark,” meaning it’s invisible, mysterious, and complex for us to describe. It would appear that dark energy and dark matter are locked in a sort of tug-of-war in our Universe, with one holding everything together while the other tries to pull it apart.

What’s the difference between dark matter and dark energy? | Astronomy.com