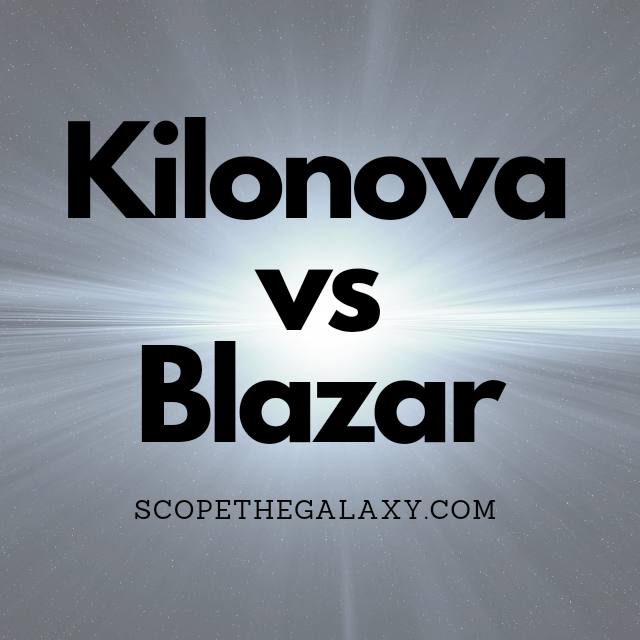 The main differences between a kilonova and a blazar would be that kilonovae are cosmic explosions that occur when 2 neutron stars merge together producing brightness equivalent to a 1,000 novas whilst a Blazars is a quasar that specifically propels jet particle towards Earth and is amongst the brightest entities in the known Universe.

There other differences between the two so, continue reading if you want a more in-depth breakdown of the two, some of their similarities along with the features that separate the two.

These jet particles travel at the speed of light towards us, and as was discovered by the IceCube instrument, they allowed us to understand a new particle which would fall under the lepton classification, neutrinos. Much like how quarks make up the majority of matter around us, leptons like neutrinos play a part in this too.

Blazars are very similar to a quasar as they require a bucket load of material build up at the center of a supermassive black hole to form.

There will be an extremely bright excretion disk surrounding these stupendously large black holes that will eject objects at a relativistic speeds towards us, which would essentially be at the speed of light.

Blazars are also some of the oldest resources out in the universe as they allow us to observe the goings on of interstellar objects, millions to billions of years in the past whether it be through the x-rays or gamma rays projected our way, through the gravitational waves or just via the light it produces.

In essence just like any other quasar they will produce arguably the brightest luminosity in the cosmos, last for roughly 10 million years and are angled in such a way that the jet particles propelled are towards Earth.

As result of this angular disposition that blazars have, which isn’t a very normal occurrence, blazars are in turn very rare. That’s why at this moment in time we have only discovered 5.

Similarities Between Kilonovae And Blazars

Other than the fact both are amongst the brightest phenomena in our universe and occur as a result of a bigger stars dead remnants of interacting (as in neutron stars and black holes) they differ significantly.

Differences Between Kilonovae and Blazars

The differences between a kilonova and blazar would include the below:

Although both blazars and kilonovae are amongst the brightest cosmic entities in the universe, one is still substantially more powerful than the other.

Kilonovae may have the ability to produce energy levels and brightness that is around 1,000 times more than your average nova but, blazars are in a completely different bracket in this regard, often eclipsing the brightness of multiple galaxies for millions of years.